February 02, 2013
I am not a historian, but I love finding stuff on the Internet that educates and entertains - here is a wonderful site that is dedicated to bicycles in early modern Japan. 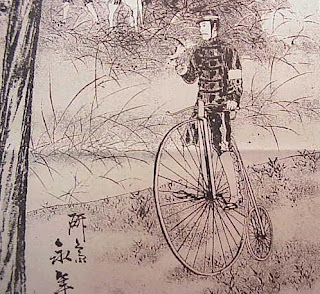 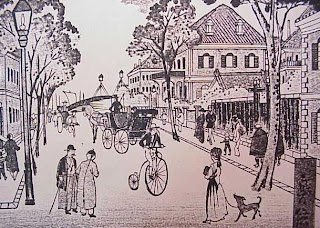 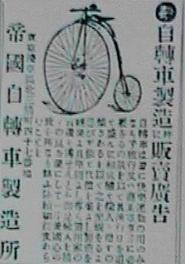 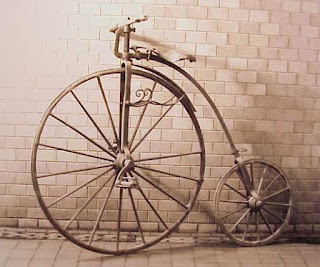 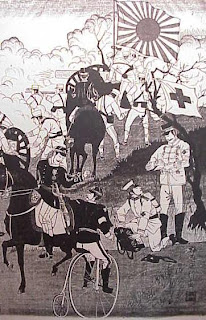 History of the ordinary in Japan.
By Yukio Ootsu

Documented information on high wheel bicycles in Japan is extremely scarce. It is quite incomplete and seems quite impossible to prove when the first ordinary appeared in Japan. However it is my life long plan and desire to find out the record. Here are my reports of discoveries at the time being.
Few undated photographs of high wheelers show a proud Japanese participation in the high wheel bicycle era. Actual examples of these bicycles that exist in Japanese museums and a few private collections show a history of both import and domestic blacksmith shop production. The early Ordinaries produced by Japanese blacksmiths locally are apparently at the same step with the world trend of the 1880's.You can tell it form early woodblock prints.
Judging from the information with dates, one can conclude that the high wheel period in Japan had a span of a decade from 1885 to 1895.

I grew up in southern Sweden going to school each day, rain or snow, with a Swedish Monark bike, three speed internal hub gears, supplied by - Shimano.

A company that has roots back to 1921, according to some sources.

Others have more details:

And here is what I might have had, back around 1987, when I briefly owned a nice second hand mountain bike with too many gears to count:

Shimano first introduced Dura-Ace 600 group sets in the 1983 as an alternative to more expensive recreational bicycle accessories. Components included derailleurs, side pull brakes and gear sets. Affordable pricing resulted in a degree of popularity that eventually attracted competition cycling enthusiasts. As a result, Shimano expanded the Dura-Ace 600 line to include dual shift levers, multi-speed gear sets and bottom bracket hubs. By the early 1990s the original 600 series had been discontinued in favor of the XT and Ultegra lines. 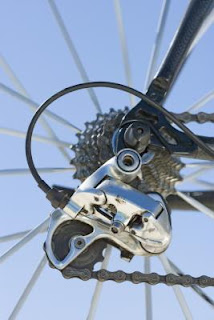 Dura-Ace 600 was Shimano's second attempt to produce a top-of-the-line parts group. The first Dura-Ace AX line was not well received, giving way to the 600 series in the early 1980s. As with many new products, once in regular use, minor problems emerged. In a sense, consumers were guinea pigs and problems had to be addressed if the manufacturer's efforts were to prove out. Improving the reliability of 600 parts soon rectified minor problems. Today, Dura-Ace parts feature the improvements Shimano made after introducing the 600 series.

Pandabonium said…
I have read that tricycles were popular in Yokohama in the 1860s and by 1870 there were enough bicycles in Osaka Prefecture that new traffic regulations included them.

Apropos to your previous post, bicycles are a "just enough" technology, it being possible for them to be made high-tech, low-tech, according to what materials are available, the riding conditions and practical needs involved. No wonder they are making a huge comeback around the world and even replacing fossil fueled means of transport.
12:08 pm, February 03, 2013

Johntaro said…
Interesting stuff! I’ve seen a few people near my home in Yokohama riding what look like mini ordinaries and wonder if the old fashioned bikes are making a comeback?
I myself like to tear up the streets on a Bridgestone “Eco City.” It’s a lean, green, asphalt-eating machine (other people refer to it as a “mama chari” though).
3:14 pm, February 04, 2013

Tom O said…
Those bikes, very large front wheel, very small back wheel, I am pretty sure originated in the UK and were called 'Penny Farthings'. Of course, that an era way before EPO and doping... ;o(
12:12 am, February 06, 2013

Pandabonium said…
According to Wikipedia, which is never (cough) wrong, in an article titled "Penny-farthing,

"Frenchman Eugene Meyer is now regarded as the father of the High Bicycle by the International Cycling History Conference."

I am grateful that someone came up with gearing that allows me to ride my bike without a direct drive to such a huge wheel!

Martin J Frid said…
Gearing, freewheels... It is all so simple. Bicycles will save us. Thanks for the comments. We need to push bike lanes and make sure we have the infrastructure to ride safely. I see a lot of kids walking to and from school were I live. Why not on bikes? Too dangerous?
12:29 am, February 09, 2013

Glenda Palm said…
Hello there, your illustrations are brilliant! Might I ask where you found them? I'm currently writing a project on bikes and am looking for non-European examples. Many thanks, Carrie
7:27 pm, April 08, 2013