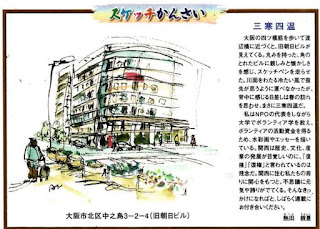 We again had some snow today but the past few days were very warm, so... I learnt that this is called 三寒四温 (san-kan-shi-on) season. Just get used to it.

Don't catch a cold, take precautions to avoid the flu. Wash your hands a lot, don't shake hands, and did I mention wash your hands many times each day?

Kodo, the taiko drum band from Sado Island has a tune called Sankanshion from their amazing 1995 Acropolis concert...

I like how this is more of a rural thing. If you live in Tokyo, odds are you have never met anyone who has heard about it. Increasingly, Japan is about city vs. country. Whenever I hear a comment about "Japan" I feel the writer is less in touch with the rural parts, but stuck in the commuting/concrete/highrise/highway/office parts. I wonder if the comment is less about this country, more about the lack of it. Of course people in central Tokyo or Osaka have no idea.

Image by Atsuta Chikayoshi, long-time illustrator at Mainichi Shimbun who works for eliminating iodine deficiency in Nepal. The building in his drawing is the old headquarters of the Asahi Shimbun in Osaka, from 1930.

Update: Speaking of climate, I really recommend The Rational Pessimist (formerly Climate and Risk) for great updates about the debate about our over-heating future.
Climate change NGO Osaka

The Rational Pessimist is one of a few very good websites about climate change. Thanks for posting this valuable link.

Tom O said…
Martin and I went to see them at Bunkamura in Shibuya back in 1992. I have seen them loads of times, both in Japan and in London. Went to Sado ga Shima for their Earth Celebration festival in 1993 and I did a workshop when they played London, at the Sadlers Wells in '96!! Last time saw them, here in London about 4 years ago, the only remaining member I recognised was the current Boss-man Saito-san. In one word they are just AWESOME
2:09 am, February 12, 2013

Martin J Frid said…
Thanks for the comments. Yes, Kodo live, what can be better. Very much a matsuri experience. Glad to know they are still touring around the world. One Earth Tour, anyone?