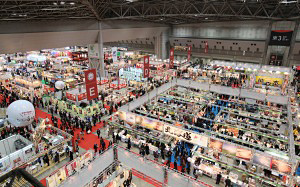 I get invited to all kinds of events, and I try to stay abreast of it all, but one of the annual trade shows I like to attend is the Tokyo Big Sight Supermarket Trade Show. All kinds of countries participate with huge displays, like Brazil, or Denmark. Others are more subtle, promoting products rather than their national brand, like Chimay or the stalls where kimchi is lauded as the next health food.

Then there is a huge area where Japanese regions get to promote their original products. From Hokkaido, to Okinawa, you name it. Small islands, huge banners and a lot of sale people. Nagano, Niigata, or Shikoku, and many other places. Fukushima also had a large booth with stuff from Aizu Wakamatsu, mainly.

Free samples as much as you can handle, and, do ask questions, they all know a lot and want to tell you more than you may want to know! 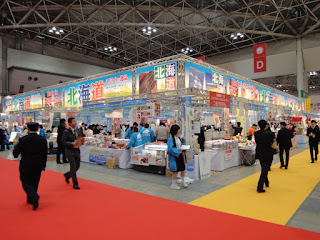 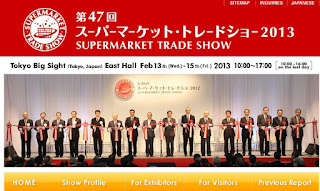 I'm glad I went, I met a lot of wonderful people.

All kinds of large companies from abroad, like Tyson, use these events to make "friends" and create inroads to the Japanese food market. Smithfield is another huge company, with pork production all over the US, trying to export to Japan. They are just like Ford or General Motors: Not that popular.

Genetically modified foods? The only booth I could find was a weird outfit promoting GMO papaya from Hawaii, and when asked, they said it was not yet for sale in Japan... They said the same thing last year.


A study by the No! GMO Campaign has revealed that Japan’s supermarket chains are refusing to sell genetically modified papaya.

The No! GMO Campaign was set up in 1996 to stop genetically modified foods. 16 years later, there is no commercial GM farming in Japan. Consumers and civic groups are continuing the battle against imported GM foods. In December, 2011 the government approved GM papaya and soon, the American producers in Hawaii were promoting the expensive fruit at a trade fair near Tokyo, giving out slices as free samples. The No! GMO Campaign started an effort to investigate if the GM papaya from Hawaii was actually sold in Japan or not.
Citizen and activists all around the country approached their local supermarket chains and the result was revealing. Not a single supermarket chain has decided to introduce the controversial virus-resistant papaya from Hawaii. Could it be that the Americans are hoping that people will simply forget about GM papaya, before they start the marketing introduction?

Do explore, more. I also want to take this opportunity to introduce a new book, Foodopoly, by an old colleague (we did a campaign against food irradiation together ages ago):

Wenonah Hauter owns an organic family farm that provides healthy vegetables to hundreds of families as part of the growing nationwide Community Supported Agriculture (CSA) movement. Yet, as one of the nation’s leading healthy-food advocates, Hauter believes that the local food movement is not enough to solve America’s food crisis and the public health debacle it has created. In Foodopoly, she takes aim at the real culprit: the control of food production by a handful of large corporations—backed by political clout—that prevents farmers from raising healthy crops and limits the choices that people can make in the grocery store.

Foodopoly blogs about "too big to eat" which is a kind of take on the way the banks or the car industry have been treated (too big to fail) but this is about our own day-to-day survival:

A big chunk of what they're feeding on is the feeding of the rest of us.  This is the topic of Wenonah Hauter's new book, Foodopoly: The Battle Over the Future of Food and Farming in America.  And she argues against simply cutting off the subsidies to agribusiness.  The problem, Hauter explains, is that we do need to eat something, and if we're going to have a chance of eating something grown democratically, sustainably, and healthfully, we're going to have to take into account the fewer than a million small and medium farms left standing.  Most of them barely survive each year.  Lots of them don't survive each year.  And most of them survive only with the help of public subsidies, subsidies they didn't need prior to an onslaught of federal legislation aimed intentionally at destroying farmers' livelihood. Midsize family farmers have an average income of $19,277 including subsidies. If we turn them into corporate serfs or their land into McMansions and shopping malls and fracking areas, we'll have nothing to eat but what we can grow in the front yard or the flower box and what already makes up 90% of what we eat: processed corporate junk.
Geoge Naylor, an Iowa farmer and former president of the National Family Farm Coalition who pushed back against President Ronald Reagan's assault on antitrust powers, remarked in 2012:

"No betrayal was more galling, or the effects more devastating for farmers and eaters, than Bill Clinton's single-minded pursuit of free trade and his support for the 1996 'Freedom to Farm' bill."

Among the lies pushed since the 1940s to tear apart family farms has been the lie that exporting grain would be the way of the future.  In 1980 the United States exported 45% of its corn, wheat, and soybeans.  By 2009 that was down to 25%.  Production has soared.  Prices have plummeted.  And the mega-farms that created the mess, just like the mega banks (and in fact the two share a lot of interchangable human parts at the highest levels), have been bailed out, and bailed out, and bailed out, every year, just like the war machine only not so expensive and specializing more in sickness than in death.  In fact, processed food has been linked convincingly to cancer.