Free Trade? Not For Important Things Like Gas, Rice 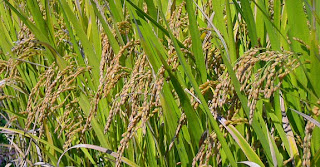 Interesting to see NHK and others preparing for Prime Minister Abe's trip to Washington, as he is about to meet President Obama. On the agenda - Abe to ask Obama for shale gas.

Japan's Prime Minister Shinzo Abe plans to ask US President Barack Obama to permit shale gas exports to Japan. The two leaders will meet in Washington on Friday for a bilateral summit.
Abe faces an energy demand, with most of Japan's nuclear power plants halted and the nation increasingly dependent on thermal power. He is eager to import US shale gas as a new, cheaper energy source. But the United States limits the export of shale gas to free-trade partners, to avoid raising domestic prices. Non free-trade partners must have their export plan screened by the US government case-by-case.

For a long time, the US has been talking about "free trade" while at the same time excluding important sectors such as the military and energy. The US will not allow exports of gas or certain weapon systems. Weird. US food exports are also part of all kinds of regulations.

WTO has rules to prevent countries to ban exports. So called "free trade agreements" are not just about trade. Countries are actually obliged to continue exporting goods and services, even if that means the local population in such country suffers. Remember rare earths? WTO members are not supposed to ban exports, but in the case of food, what will happen?

Of course that is not right, and a lot of us, including many NGOs, have protested. Japan has this to say (pdf)

The world’s food supply is approaching crisis, due to the increasing use of
agricultural produce as an energy source, the increased demand for agricultural
produce accompanying the expansion in populations in China and India, and the
frequency of abnormal climatic conditions in line with global warming.
○ Against this background, there has been a sudden acceleration in the
implementation of export restrictions regarding wheat and other cereals in certain
countries. This has led to raised prices, causing significant impact on food security
for countries importing food, particularly poorer developing countries.


You read that right. Japan is officially concerned about global climate change, and what it might do to food trade.

Free trade or not, some things are more important than others. Japan recently caved in and allowed beef (30 month old, due to mad cow disease) from the US to be imported again; will the US have anything to give in return? Taiwan is still trying to limit US pork imports, since the US pork producers use ractopamine, a chemical not allowed in Asia.

The World Trade Organization was supposed to deal with such issues, but has not lived up to its mandate.

Naoatsu Aoyama at the Asahi Shimbun Globe writes over at AJISS:


Like it or not, Japan could find itself in future with less leeway to pursue a foreign policy divergent from US strategy. This does not necessarily mean, however, that Japan will be subservient to the US. Cooperation in the energy sector has a reciprocal nature. Japan is obliged to derive as many lessons in nuclear power technology as possible from the Fukushima Dai-ichi nuclear power plant accident. Sharing these technical lessons with the US would no doubt be very beneficial for the US as it pursues dependable private-sector nuclear energy at home and non-proliferation of nuclear weapons internationally.

Meanwhile, Japan is trying to make sure that important things like agriculture, and rice in particular will not be part of the Trans Pacific Partnership (TPP) negotiations, should Japan decide to join. Rural Japan is not going to just quit farming, it is such an important part of daily life (kurashi) here.

What about the Satoyama Initiative and lots of other great proposals, like Food Action Nippon?

Prime Minister Shinzo Abe has vowed that he will not sacrifice Japan's agriculture to join the Trans-Pacific Partnership free trade talks.
Abe was speaking at a debate on this fiscal year's supplementary budget bill in the Upper House Budget Committee on Tuesday.
Upper House member Toshio Yamada told the session that Japan's automobile industry has a wide range of related industries and could offer many jobs. He said, however, that in exchange for protecting the car industry by joining the multinational free trade agreement, farming industry should not be sacrificed. Abe agreed with Yamada's view, saying he believes farming is a fundamental industry for Japan and he will consider how to handle the TPP negotiations with this in mind. The prime minster added that he will do his best to protect Japan's national interest at his meeting with US President Barack Obama scheduled for later this week.
Meanwhile, lawmakers of the ruling Liberal Democratic Party opposed to joining the TPP talks have submitted to the government a resolution that includes items that should be exempted from the abolition of tariffs. About 100 lawmakers attended a meeting to compile the resolution Tuesday. The resolution cited rice, wheat, beef, dairy products and sugar as items that should be made exempt from the tariffs abolition. It also said that the participation of for-profit businesses in the management of medical institutions should not be allowed.
The resolution added it strongly hopes that the Japan-US summit later this week will reflect Japan's national interest.

Britain is also worried about its energy future (as should anyone else) and hoping to tap into possible new gas. Alistair Buchanan is chief executive of Ofgem writes for The Telegraph: Keeping Britain's lights on will come at a price

Anyone who doubts that the Government’s energy reforms are necessary should take note of the events of a few weeks ago.

Britain (...) will have to compete for its gas on a worldwide market. Today, Asian LNG prices, which drive long-term contract prices, are about 60pc higher than UK gas prices. But what about shale gas – will that not save the day? It is true that the US has transformed its energy market thanks to shale, but in our time-frame, when Britain will rely on gas for its power stations, this is not going to happen on any significant scale either here or elsewhere in Europe.

Even if the US allows exports (and assuming they come to Europe), it will still cost about the same as we are paying for our winter gas now. No one doubts that there is plenty of gas out there, but what is critical to Britain is how much will be available over the next five years and how much we will have to pay for it to ensure that it comes here.

Pandabonium said…
According to Kjell Aleklett - Professor of Physics at Uppsala University in Sweden where he leads the Uppsala Global Energy Systems Group - enough gas to power both Chicago and Washington DC combined is currently being "flared off" (burned at the well) in the Bakken and Eagle Ford shale fields. This is because the price of gas in America does not cover the cost to obtain it and distribute it. Fracking for oil is making money, but the return of energy for energy invested is very low and associated gas is being flared off - adding the global warming gas CO2 to the atmosphere.

In the short term (sadly, we humans evolved to value the short term m ore than the future) Japan will get some low cost gas. Long term, the question will again be, is there enough for our economic system to continue? and what if global warming reaches an unstoppable tipping point?

I am glad that Abe has promised to protect Japan's agriculture. I am very much afraid that he does not understand the consequences of continued industry driven business as usual in terms of energy.

Tom O said…
I think its the WTO that, in agreeing to help (dare I say 'support') certain economies they plant - pun intended - stringent clauses. Thus a country that always grown plant/crop 'A' is forced to grow/produce something else. Even to the exclusion of the local economy. WTO is of course just about profit. As for 'Britain', one certain Brit doesn't plan on being part of its future.
12:42 am, February 22, 2013

Martin J Frid said…
TPP or WTO - nothing to do with "free" trade. That's just a name to make it sound better. It is all about opening markets in other countries without any concern for the people involved, and it is certainly not "free" as it introduces all kinds of new rules for intellectual property, investment protection and market expansion rights. It is all about profit for the already rich.

A good question though is, what kind of world do these already rich people think their kids and grandchildren will inherit, with 4-6 C temperature increases, lack of fuel, and all kinds of social unrest.
8:17 pm, February 23, 2013