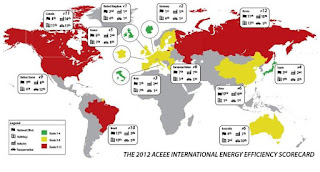 Last July, an interesting report was published by the US energy efficiency watchdog called the American Council for an Energy-Efficient Economy (ACEEE). I had never heard of them before, and mostly they have done stuff on individual states in the US. But the report that came out was a novel attempt to rank 12 major countries in terms of energy efficiency.

Then I had a look, and they managed to rank the United Kingdom as No. 1, followed by Germany, Italy and Japan in that order. I thought it is was a bit odd, and forgot about the whole thing (also because the entire point of their exercise seemed to be to shame the United States, that ranked really low compared to others, at No. 9).

I also thought it was great that Japan was up tops in a number of categories, if not always No. 1. There are certainly stuff that Japan can and should do better, like building insulation, but why is its super-efficient public train system not more highly appreciated?

ACEEE divided the 27 metrics across four groupings: those that track cross-cutting aspects of energy use at the national level, as well as the three sectors primarily responsible for energy consumption in an economically developed country—buildings, industry, and transportation. The top-scoring countries in each grouping are: Germany (national efforts); China (buildings); the United Kingdom (industry); and a tie among Italy, China, Germany, and the United Kingdom (transportation).

ACEEE Executive Director Steven Nadel said: “The UK and the leading economies of Europe are now well ahead of the United States when it comes to energy efficiency. This is significant because countries that use energy more efficiently require fewer resources to achieve the same goals, thus reducing costs, preserving valuable natural resources, and creating jobs. Unfortunately, our results show that nowhere is the vast potential for improvements in energy efficiency being completely realized. While many countries achieved notable success, none received a perfect score in any category – proving that there is much that all countries can still learn from each other. For example, the United States scored relatively high in buildings, but was at the bottom of the list in transportation.”

Then Andrew DeWit at Rikkyu University mentioned the study in a recent paper over at Japan Focus, Abenomics and Energy Efficiency in Japan. He is particularly gloomy when it comes to Prime Minister Abe's attempts to revive the economy, but should all blame be put on Abe (rather than, say, on LDP's best friends at Keidanren), I wonder? My mantra remains the same - Japan needs to lead the way in reducing energy consumption, and other countries need to follow. Reducing use, wasteful or not, is more important than efficiency, if investment in efficiency aims at increasing or maintaining current energy consumption levels. Building more cars and pouring more concrete will no longer be possible, no matter how "energy efficient" the increase in the economic effect is supposed to be.

Then, I thought, it is as if the shock of March 11, 2011 is still a wound that has not healed, in many ways. As De Wit points out: "...it is all the more urgent to put robust goals on energy efficiency at the core of increased infrastructure spending, lest the coming deluge be as wasteful as past practice. Yet virtually all of the domestic and overseas commentary on the content of the Abenomics stimulus neglects the potential for smart, targeted investments in energy efficiency to provide immediate economic demand as well as foster innovation, reduce future energy costs, and provide a range of other benefits down the road..."

Do read DeWit's assessment, he makes a number of good points:

Japan’s failure to make rapid strides in efficiency is also something to be greatly lamented. Efficiency is always and everywhere a difficult area to get more than a 1 to 2 percent increase per year. As we have seen, this is not because technical potentials are rapidly exhausted, nor that economic practicalities are limited by high costs. In fact, there is vast potential for gains in efficiency using technology and policy approaches that are already, as it were, on the shelf. Disinterest and informational barriers are among the major factors that hinder countries from making progress on efficiency. Thus the Japanese public’s post-Fukushima support for efficiency and conservation is incredibly fertile soil. Japanese policymakers had (and continue to have) an unrivalled opportunity to work with.

Still facing constraints on electric power supplies and now in a recession, Japan is in a good position for a smart efficiency drive. On power policy, the newly elected Abe Administration is in a twilight zone wherein restarting any of the theoretically usable 48 nuclear reactors, out of a total of 50, is not at present possible. Nor is a sufficiently rapid diffusion of renewable energy in the cards to overcome the shortfalls resulting from the 3.11 nuclear disaster and subsequent plant closures. The Abe regime stresses a grab bag of stimulus spending ostensibly aimed at helping to ignite a sustainable recovery and build a stronger economy. Clearly the package is actually more carefully targeted at maximizing the LDP’s electoral prospects in the Upper House elections this summer than at solving Japan’s energy and environmental problems. That, of course, is politics. But it is in fact possible, as well as essential, that pork barrel politicking be superseded by a massive energy-efficiency campaign. Investment in efficiency would not only provide plenty of “shovel ready” work in the short run, but unlike roads and bridges would also increase Japan’s global competitiveness, reduce its roughly YEN 24 trillion bill for fuel imports, and make a powerful contribution to showing rapidly growing Asia and the rest of the world a means towards sustainable growth. Indeed, an efficiency drive would help Japan find its feet, on a truly smart alternative path, two years after Fukushima.
Earthquake Economics 101 Energy politics progress reduce renewable energy sustainability

Tom O said…
The UK 'ichiban' in terms of energy efficiency (um, excuse me while I fetch my horseburger..? Still thousands of cars on roads and all the related 'developed world' pollution residue. But, surely, if the US was threatened with a supply of 'gasoline' they wouldn't invade another country to ensure its continued availability.... Those SUV's gotta get their guzzling stuff from somewhere, ne.
10:35 pm, February 14, 2013

Martin J Frid said…
Tom, yes I was a little surprised too by the UK ranking... Also surprised how little attention this study has gotten in the US, but then again, Obama mentioned energy efficiency in his State of the Union speech, noting that that “states with the best ideas to create jobs and lower energy bills by constructing more efficient buildings will receive federal support to help make it happen.” And, "let's cut in half the energy wasted by our homes and businesses over the next twenty years.”

Pandabonium said…
Every President since Nixon has promised to make the US "energy independent". Personally, I think the only one sincere in that effort was Carter, but we know what happened to him. People always prefer empty rhetoric to the hard work of actually solving problems.

The DeWit article is interesting. But until we change the way money/banking works - requiring economic "growth" rather than measuring quality of life and properly valuing nature and resources in situ, I'm afraid we'll continue to deceive ourselves by using ever more while doing it more "efficiently". Less really is more.