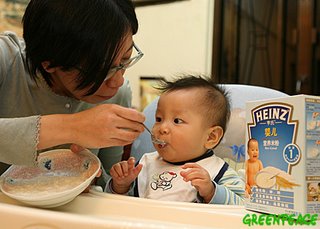 "We were completely shocked," said Steven Ma from Greenpeace in China. "Babies should be the last if we ever wanted to test unapproved GMO crops on human."

No official at Heinz in China or Hong Kong was immediately available to comment, according to Reuters. The rice, known as Bt rice, contains a bacterial gene toxic to a particular group of pests. Angus Lam from Greenpeace in China told Reuters it was the same variety of Bt rice found last year in markets in the southern city of Guangzhou and Wuan in the central province of Hubei.

This appears to be serious, as even the English website of China Daily has the story. They report that China's Agriculture Ministry said it was looking into the claim. In a statement carried by the official Xinhua News Agency, the ministry said it hasn't approved any genetically modified rice for human consumption.