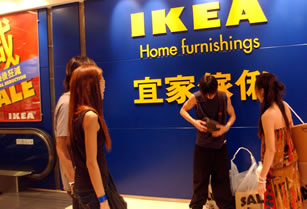 By stocking Ikea's Chinese shops increasingly with China-made products, Duffy pushed prices on some items as low as 70 percent below prices in Ikea outlets elsewhere. An armchair from Ikea's popular Ektorp range retails for $112 in China, 67 percent less than one sold in the United States.

The gamble seems to have worked. Ikea -- whose name in Chinese, "Yi Jia," means "comfortable home," -- is anything but comfortable on weekends, as thousands of Chinese crowd in to look and to outfit their homes and apartments. Weekend throngs at Ikea's three stores in China -- in Beijing, Shanghai and Guangzhou -- are so big, with more than 20,000 visitors each on any weekend day, that employees use bullhorns for crowd control.

Next month, Ikea will open a 452,100-square-foot store in Beijing, second in size only to its flagship store in Stockholm. At the store, which Ikea furnished with extra-wide aisles to handle the expected crowds, the Swedish company expects to sell enough furniture every year to fill about 5,000 40-foot containers -- double what it sells in other stores.

Read the rest of the article here.

What Washington Post unfortunately ignores is that IKEA is rather unique among foreign retailers in China, according to China Review, the magazine published by the Great Britain-China Center:

IKEA has imported its labour and environmental standards to China in their entirety. The company’s “one size fits all” model rests on a belief that its universal values of environmental and social responsibility must be just that: universal. To achieve this, however, it admits it has forfeited the speedier commercial growth that others, such as Carrefour, B&Q and Wal-Mart enjoy in China. Nonetheless, it is living proof that a company can make money in China (albeit less of it, and more slowly) whilst remaining true to its global ethical standards.