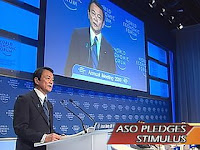 He said all major greenhouse gas emitters should take part in a new international framework that will replace the Kyoto Protocol. Aso stressed that participants should include both developed and developing nations. He specifically mentioned US President Barack Obama and Chinese President Hu Jintao and urged the 2 countries to participate in the new framework.

Aso also said Japan intends to announce by June its greenhouse gas reduction target for around 2020. So far, Japan has never done that, so this is actually a big step. Stay tuned, this could get interesting. Or not:

Aso's pledge to announce Japan's goals for cutting greenhouse gas emissions until 2020 was made with an eye toward the COP15 meeting to be held at the end of the year. "This should not be a baseless declaration, but should be achievable in terms of economics and should contribute to international efforts to fight global warming," Aso said. Aso pointed to Japan's history of turning past oil crises into business opportunities as an example of what the nation was prepared to do to deal with global warming.

And I can't help wondering, did NHK just miss something, or did he really not mention the important COP10 meeting of the United Nations Convention on Biological Diversity, to be held in Nagoya later this year? The two "protocols" (Kyoto and Cartagena) are both in dire straits and need a lot of attention.
Biodiversity Climate change

Tom O said…
As Shakespeare once wrote, "a rose, by any other name would smell as sweet.". It is what it is. Thus, the Kyoto Protocol - by any other name/being replaced - would still be an agreement that, um, no-one agrees to or honours. Or not?? Surely even countries like China - where economic expansion seems to still be on track - must know real change and action is required now. Its a little known fact that along with the US another country to blank said Protocol was Australia. This has now changed with their change of government but beforehand?? But, back to the point, the Kyoto Protocol was of course Japan's baby so fair play for at least seeing that something needs to be done to (hopefully!) kick-start real action.