UK To Get Hitachi Super-Express Trains 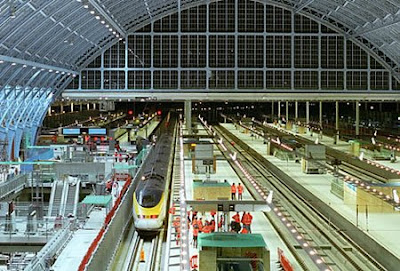 Some good news, glad to see at least one government not going into a protectionist tail-spin, as others seem intent on doing. The Hitachi 395 Javelin was selected for Britain's Southeastern train company on the soon-to-be-completed final section of the Channel Tunnel Rail link from Kent into central London. By 2013 they will connect London to Edinburgh and replace the 30-year-old InterCity 125s.

The trains will be the fastest operating domestic service trains in Britain, running at a maximum speed of 140 mph (225 km/h). NHK World notes that technically, these are very advanced trains:

The stock will include hybrid trains equipped with diesel engines and lithium ion batteries. Hitachi says there is growing recognition of its environment-friendly technology. Capitalizing on the reputation of its bullet trains, Japan's manufacturers see the worldwide push for "greener" transport alternatives as a significant opportunity.

Now, if only the British could teach the Japanese how to build large, wonderful train stations...
trains Transportation

Tom O said…
A certain shit has hit the fan here about this, the 'recession' giving it extra bite about giving this deal to a Japanese kaisha. But, I can't think of a British company that could do the job anyway. And not to the standard I think we are going to see.

St Pancras International - what a transformation! It is a real european terminus, big, airy, bright and a 'real' train station. There is a little bar beyond the end of the lines where one have have a beverage (ahem, beer..) and watch the Eurostars arriving/departing - can't tell if that is going to Brussels or just two and a half hours ago that one coming in was in the centre of Paris. THEN, then there is the architecture and you can see what a wonderful steel roof construction. A great place to spend to spend a little while before I head back to Brighton.

Of course, it is here that one would start one's journey if one's destination was Japan. To Paris, then the connection to Moscow. Then...

Pandabonium said…
I am always amused by corporations referring their product as "environment friendly". If there were truth in advertising, they would have to say "somewhat less environment unfriendly".
12:03 pm, February 14, 2009

Martin J Frid said…
Thanks for the comments, good points.

Seems the UK has old trains (30+ years old in average, not great for safety, difficult to justify repair costs, need to be replaced at some point) and with this deal they get the very best trains in the world. And the UK media loves to complain...

I'm hoping Hitachi will be very flexible and make sure this is a deal that benefits both people and the environment as much as possible!
1:54 pm, February 15, 2009

Safety on trains here - check out on google all the fatal train crashes here in the last ten years - and why.