NHK World: Not Getting Taro Aso's US Visit Quite Right 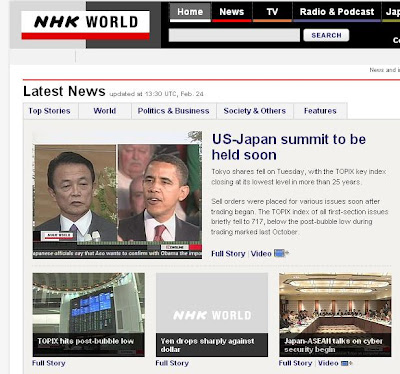 Tonight I arrived home late and checked the website NHK World to see if there were any updates about prime minister Taro Aso's visit to the United States.

Yes, there was a headline, but they made some terrible editing mistake, see the attached screen save.

This is Japan's official media, something similar to BBC in the UK. And the editors in Shibuya cannot get their main story right? On a night like this?

I worked for NHK World for three years, but that was for short wave radio. To see NHK make this kind of stupid mistake is just too embarrasing. I might as well read First, Cake!.

NHK: Get your main story right.

Meanwhile, BBC does have the story: Japan's PM first to visit Obama

"The alliance that we have is the cornerstone of security in East Asia, it is one that my administration wants to strengthen," said Mr Obama

"It is for that reason that the prime minister is the first foreign dignitary to visit me here in the Oval Office."

"I think it is testimony to the strong partnership between the United States and Japan," he said.

And while US Secretary of State Mrs. Clinton did talk about environmental concerns and global warming, both here in Tokyo and on her visit to Beijing, there are few indications yet that Mr. Aso felt the need to bring up such topics. Over here at Kurashi we are a tad disappointed, to say the least.

...Also on the agenda is global warming, an issue on which the two allies have much closer positions now than during Bush's presidency, and Aso and Obama are expected to agree to work together in forming a post- 2012 global emissions cut protocol, including exploring ways to win cooperation from China and others.

Japan is eager for both the United States and China, the world's top two emitters, to take part so that the new framework after the current Kyoto Protocol expires can be effective.

With Obama placing emphasis on clean energy, including in the economic stimulus measures, Aso is expected to propose that Japan and the United States combine their expertise to further develop new alternative energies, promote the use of hybrid and other next generation vehicles, expand markets for energy efficient products and boost peaceful use of nuclear energy.

The aim is to help create jobs in both countries while also contributing to carbon emissions reduction, Japanese officials said.

The leaders ware also likely to reaffirm plans to steadily implement a roadmap to realign the U.S. military presence in Japan by 2014 to reduce local burdens, as stipulated in an agreement signed between the two nations' foreign ministers last week when Hillary Clinton visited Japan on her overseas debut as secretary of state.

Benjamin said…
Hahaha, this is certainly the first time my blog has been compared to NHK, and favorably at that.