February 22, 2009
Water shortages in California will be severe this year. Not good news at all for Japan, that imports a lot of food from the state-previously-known-as-golden. Over at Treehugger, John Laumer writes, "Non-Californians: If you have been thinking about planting your own vegetable garden for the first time, now would be a good time to order seed and buy a shovel and pick."

For years, Japan has been strongly encouraged to stop protecting its farmers, and import more food from abroad. Cheap imports have then made it virtually impossible to make a living as a farmer here. Add to this the climate problems in China and Australia, and you have every reason to be worried:

Food prices throughout North American, and even parts of Asia, which import produce from California, will be affected in the short-term. Long-term water shortage prospects point to an either-or scenario: social disorganization on a large scale or, alternatively, to massive, government-funded water project expansions, plus water conservation measures, and dietary changes.

Next time you go shopping, take a look at the lemons. The domestic ones （国産レモン) are clearly labelled (many are from Hiroshima prefecture) while the imported ones are about half price; they are also laced with post-harvest pesticides so they can survive the long journey, kill pests and fungus, and get a longer shelf-life. TBZ, Chlorpyrifos, Imazalil, Syngenta's fungicide Cyprodinil or Ciba Geigy's Fludioxonil... you name it. OPP? Called 2-Penylphenol in English, it is sold under the trade names Dowicide, Torsite, Preventol, Nipacide and many others. In April 1977, when Japanese consumers found out that imported lemons and grapefruit contained high levels of OPP, the so-called lemon war broke out:

The Ministry of Health and Welfare authorized use of ortho-phenyl phenol (OPP) as a fungicide for citrus fruits under pressure from the US FDA. Consumer groups launched a boycott of imported citrus fruits treated with OPP. Consequently, production and sales of domestic lemons increased. 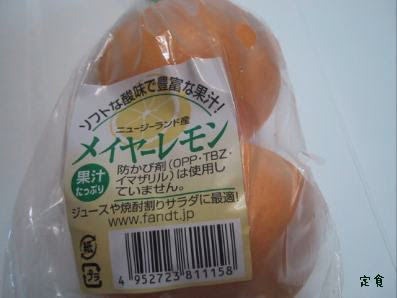 If you like a slice of lemon with your tea, make sure to cut of the skin before adding to your cup. Or - buy organic, or domestic - lemons (and wash the skin well).

New Zealand lemons without OPP or TBZ are also sold here, check Fandt for details (in Japanese). Note they clearly say on the label that they do not use these chemicals: 防カビ剤 (ＯＰＰ・ＴＢＺ・イマザリル）は使用していません。

Global Voices notes that farming is getting trendy among celebrities.

Quoting blogger Ｄｉａｒｙ ３.０８, a hair dresser who insists on the hardship of farm work:

I come from a family of farmers living in the mountains, and when I was a kid I often had to help my folks with their work. So even I, who used to say "I will never be a farmer", can understand this agriculture boom, which is about to take off.
However, I cannot help looking with suspicion at this trend that, according to many magazines, seems to be very popular among celebrities lately.
You can't grow any vegetables just going out into the fields once a month.
I’d like to tell them: "if you really want to do that, then instead of going to Yamanashi or Tochigi once in a while, rent a ward farm and try to grow everything by yourself!"
I have no right to speak to them in this way though, as I don’t work as a farmer, but nonetheless farm work is very hard.
[The proportion] of hardship to fun is probably something like 90:10. (It might be more like 50:50 in the case that [you are growing] food that only you will be eating.)

On TV and in magazines, there is more and more coverage of people who earn their livelihood through agriculture.
Of course it’s wonderful how those people can make a living of agriculture, but why is it that all of the media have decided to cover this topic?
I have the feeling that their focus is not on the beauty of agriculture, but rather that they are trying to give the message that "if you dedicate yourself to agricultural work, you may be overloaded with work, but at least you won’t be short of food".

Pandabonium said…
I had a lemon tree in Hawaii. Citrus trees need cool weather to do well, but this one surprised me with loads of fruit, even in the warm climate. The fruits and vegetables one grows are the best. After that - the closer to home, the better.

Anonymous said…
Thanks for the information. I always buy domestic lemons, but it's because I prefer to buy local--I had no idea the American imports were doused with all of those chemicals. Now I feel a bit better about paying the high price of domestic lemons. By the way, I've never seen New Zealand lemons, and am especially amazed to see you found meyer lemons--where did you get them?
8:26 am, February 23, 2009

Of course the cliche here persists that fruit costs a fortune in Japan, the imported kind of course.

Once did a trip while working in Japan, we went away for a week - big juku school trip for kids. Anyway, incredibly enough we visited an orchard and we were able to pick our own - just amazing big fat firm and crisp apples. I hope the experience stayed with some if not all the kids. I remember many years ago, on a trip to Israel when I was 19, visiting an orange grove and picking oranges then eating them straight away - still warm with the sun's heat. Felt SOO good all round.
6:09 am, February 24, 2009

Pandabonium said…
I just noticed a trade name that could also be a verb - "Dowicide": killing yourself through the consumption of poisoned food.

I tried buying heritage seeds from the US, but the cphytosanitary certificate required to import them far exceeded the cost of the seeds.

Martin J Frid said…
Amy, thanks for the comment! For the New Zealand lemons try contacting F&T, the Kanagawa-based imported that I linked to, to find out where they are sold (seems they import them seasonally from June to October):