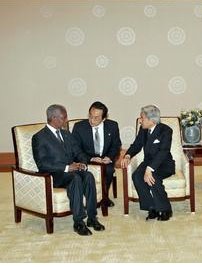 The Japanese press chose to ignore Kofi Annan's plea for Japan to improve relations with China and South Korea, instead focusing on Iraq and other issues. Even Asahi Shimbun, the most left-wing or should I say liberal newspaper seems to have felt embarassed that Kofi Annan lectured Japan about Asia. Sad, but at least better than the conservative Yomiuri Shimbun, that totally ignored the issue.

U.N. Secretary-General Kofi Annan said Wednesday that Japan could warm its soured relationships with China and South Korea if it expressed remorse and regret for its acts during World War II, following the example of Germany.