Tsushima: What goes around, comes around 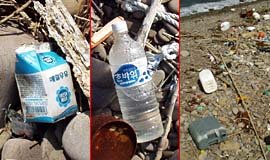 I liked this story in The Japan Times about a joint Japanese - Korean project to clean up the beaches on Tsushima Island, near Nagasaki:

According to the Tsushima Municipal Government, about 250 tons of cans, bottles, plastic bags and other kinds of litters were collected in 2004, most of it coming from South Korea. Last year the figure grew to 650 tons. Tsushima officials said the town cannot process the increasing amount of garbage, so it asked Seoul to help in the cleanup effort.

The annual joint project came about with the help of Pak Byong Jun, 37, who came to work at the Tsushima government in 2001 on a bilateral exchange program. Pak said he had been shocked to see so much garbage from South Korea washing up on Tsushima's beaches. He organized the first cleanup in May 2003, drawing some 300 college students from Busan.

Pak quoted a student who joined the event as saying, "It's a shame that garbage from my own country is ruining beaches of another country."

(Photo showing Korean garbage on Tsushima from this website)
Nagasaki

Humour and last laugh said…
envirnmental pollution is of different nature in different places but the effect is the same. Interesting blog.
11:19 am, May 22, 2006

Big Tom said…
It would help if Koreans would adopt the concept of the garbage can. It seems that garbage cans are unsightly, so they remove them after the crush of the peak tourist season, which last about 30 days every summer.
9:31 pm, September 06, 2006