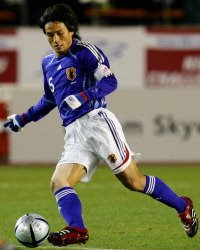 The Mainichi thinks Japan coach Zico figures his team has nothing to fear at the World Cup. Drawn in a tough Group F that includes five-time champion Brazil, Australia and Croatia, the Asian champions will need all the courage they can muster to advance to the second round, however. Zico, who took over from Philippe Troussier after the 2002 World Cup, said Japan's players have become stronger after a series of setbacks. And actually, Japan won 11 of 12 games to qualify for the Germany World Cup.

Japan opens its World Cup campaign on June 12 against Australia. "The match against Australia is very important," Zico said. "They have many high-level players who play in Europe and if you give them space, they'll define the match so we have to mark them very closely." Australia also has Guus Hiddink, who guided South Korea to the semifinals in 2002 and is widely regarded as one of the best coaches in the game today.

Only one month to go before the fun begins!