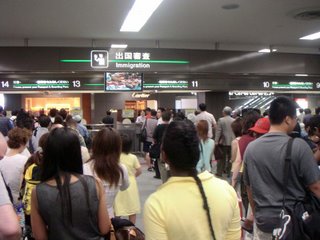 A bill requiring fingerprinting and photographing of foreigners upon entry to Japan was passed Wednesday as a way to prevent terrorism, writes The Japan Times:

Despite strong criticism from the Japan Federation of Bar Associations and human rights organizations, the bill cleared the House of Councilors with a majority vote by the ruling Liberal Democratic Party and New Komeito.

With the revision of the Immigration Control and Refugee Recognition Law, an estimated 6 million to 7 million foreigners entering Japan every year will be obliged to have their fingerprints and photographs taken, along with other personal identification information.

I agree with the critics, and wonder how Japanese people will react if they are subject to the same humilating treatment in other countries.

"By targeting only foreigners, the Immigration Bureau is encouraging discrimination against foreigners," said Makoto Teranaka, secretary general of Amnesty International Japan. The Japan Federation of Bar Associations issued a statement Monday expressing concern over the bill: "Even (if the law is) for antiterrorism purposes, human rights secured in accordance with the Constitution and the International Human Rights Law must be observed. Establishing a society that secures the human rights of minorities, including foreigners, is another important way to prevent terrorism and crime."