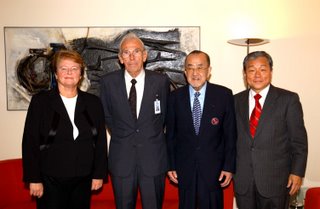 I have worked with WHO, especially with the WHO/FAO Codex Alimentarius Commission food standards body, so this news today from Yonhap caught my attention:

Lee Jong-wook, director-general of the World Health Organization, died early Monday of a stroke, the WTO said. He was 61. "All of the staff of the WHO extend their most sincere condolences to Dr. Lee's family. The sudden loss of our leader, colleague and friend, is devastating," the WHO said in the statement. Anders Nordstrom of Sweden, the WHO's assistant director general for general management, will serve as acting director general, the WHO said in a separate statement.

Lee is survived by his wife Reiko Karabuki and a son. He was elected as the head of the U.N.'s health agency in May 2003. His term was to last five years. Lee was born in Seoul and received a medical doctor's degree from SNU and a master's degree in public health from the University of Hawaii. Lee built a reputation for tackling health problems associated with poverty and was considered an efficient administrator during his nearly two decades of service within the international health body. He was appointed as the secretary-general of the WHO in 2003, becoming the first South Korean and the second Asian to lead an international organization under the United Nations.

If I was really, really really rich, I'd give the WHO a whole lot of money. There are few organizations that can do so much good in the world. BBC has a good article about the legacy of Lee Jong-wook and the current campaigns and challenges for WHO.