In November 1989 I was lucky enough to see BB King perform with Irish band U2 in Yokohama. The Arena is a great place for music and I was very close to the stage, up on the right side.

Last week, George W Bush was in town and as I walked down the street in Waseda, there were a lot of police cars and tension. If you read The Asahi you know that Mr. Bush only talked about baseball, and questions about Afghanistan or Iraq "were not allowed."

Not a very good way to contribute to the spread of free speech, liberty, and democracy, on a major university campus in Japan, but, hey, what do you expect. A friend of mine laughed when I complained and made hands movement, indicating that Mr Bush was just a 文楽 (bunraku). 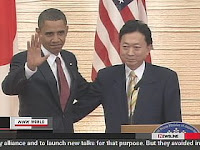 Today, Mr Obama is visiting, and NHK notes that "Obama said that the United States belongs to the Asia-Pacific region, and that he considers it important to strengthen the alliance with Japan for the sake of the region."

Kings, presidents, emperors... We expect a lot more from our dear leaders.

...the Emperor said: "As Japan is undergoing an aging population and harsh economic conditions, I understand that you have various concerns and pains. While I give thought to the fact that the Japanese have built up what we are today through extreme efforts out of the ruins of the post-war period, I hope that you will work together to give your best to build a better society."
politics