This morning I was (rudely) awakened by the call of the local gasolin truck, making his rounds for the benefit of some of my fossile fuel-burning neighbours. He has a loud sound track, on his small truck, playing a cheesy clarinet tune, and a young lady announcing, endlessly and cheerfully so, on a tape loop: "Tooyu hanbai, 18 liter, 1380 yen!" ("Selling 18 l of heating gas for 1380 yen!") while he slowly makes his rounds. 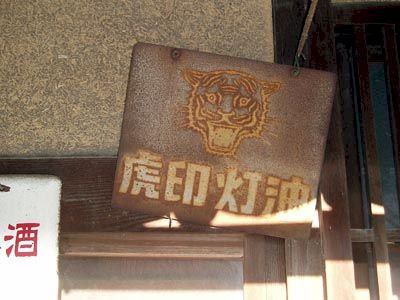 Once upon a time, in a country far, far away... There was an oil company putting up metal advertising signs with its 虎印灯油 (Tiger Brand Oil) logo all over the place. It seems very retro today, and Japanese bloggers are delighted when they find one, even if it is rusty. People who were born in the bubble economy days can afford to be nostalgic, at least for now.

The "Put A Tiger In Your Tank" advertising campaign introduced by US oil company Humble in 1964 was even popular in Sweden when I was a kid. Did they get the idea from Japan, or did the Japanese copy the American campaign? Your guess is as good as mine, at this point. 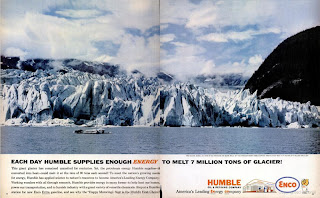 Recently, on Grist.org, a blog I like, Humble's old "Happy Motoring" ad in Time Magazine from 1962 has resurfaced, because it is so blatantly significant (and funny) today:

It gets better: This was one of the companies that also created this WW2 ad:

We're floating to Victory on a sea of OIL

By 1960, a company called Standard Vacuum, or Standard Oil, was selling oil in Japan, as noted by the Today Soup/Oil Heater & Stove 本日のスープ or sabotage soup blog, who is seriously devoted to collecting this kind of stuff, "Various tasteful things becomes spice of life..."

Stan-Vac? I'm afraid I have never heard this name before.

Standard Oil was founded by John D. Rockefeller, and in the Asia-Pacific region, they had oil production and refineries in Indonesia but no marketing network. Socony-Vacuum had Asian marketing outlets. In 1933, Jersey Standard and Socony-Vacuum merged their interests in the region into a 50-50 joint venture. Standard-Vacuum Oil Co., or Stanvac, operated in 50 countries, from East Africa to New Zealand, before it was dissolved in 1962.

Japan's oil deals made the news back in 1934, when they decided to not adhere to US oil interests. Time Magazine noted that Japan had adopted a new National Oil Business Law.

Provisions:
1) foreign oil companies doing business in Japan must build additional storage tanks and keep always on hand a six-months' supply of petroleum in addition to their normal needs;
2) they are subject to quota restrictions on retail sales which thus far have been rigged to favor Japanese oil companies at the foreigners' expense;
3) the Government reserves the right "in case of emergency" to purchase all petroleum in Japan at its own price, which may be below cost or purely nominal (i. e. confiscatory);
4) to ensure compliance with the law, foreign firms will be licensed to operate for only one year at a time and must file estimates of the amount of business they expect to do for several years in advance. Once an estimate has been accepted by the Government, all petroleum called for therein must be imported "irrespective of business conditions."
Read more: http://www.time.com/time/magazine/article/0,9171,882562,00.html#ixzz0XICUilRM
But that was then.

So, who owns the small truck with the loud sound track, that cursed my morning sleep this morning? This is where things get tricky.

Standard Vacuum Oil Company (predecessor of ExxonMobil) signed an agreement with Tonen General Sekiyu K.K. in 1949 (Company designated as an oil refining and supply company.) Tonen was founded in 1939 under imperial Japan's national policy, as a manufacturer of aviation fuel and lubricants for the military. Today, ExxonMobil holds a 50.2 percent stake in Tonen General Sekiyu, according to fundinguniverse.com:

Although Tonen Corporation was incorporated almost ten years before General Sekiyu came into being, General Sekiyu's roots extend much further back than its date of incorporation. General Sekiyu had its beginning in the Mitsui zaibatsu, a very large general trading company, which became involved in the distribution of petroleum products as early as the 1880s, when it began to sell kerosene. Although it was later forced out of that business by foreign competitors, the company re-entered the oil business in the years following World War I. Since Japan has very little natural petroleum, this re-entry meant dealing with a foreign supplier. In 1920 Mitsui became the exclusive distributor in the Far East for the refined petroleum products of General Petroleum Corporation, a U.S. company. Mitsui quickly set up facilities to market and store oil and, by selling high-quality oil from California at competitive prices, was able to challenge successfully the dominance of Dutch oil interests in Japan.

In 1934 the Japanese government passed the Petroleum Industry Law, bringing the oil industry under government control as part of the preparations for the expected war.

Petroleum, used to power Japanese warships, was seen as a vital strategic resource. The law required all foreign oil companies to maintain a six-month supply of oil beyond the usual inventories. When Stan-Vac balked at this requirement, Mitsui compromised with its foreign partners by building tanks that would hold a three-month supply, while the U.S. firm took care of the other half of the requirement.

In July 1939, just a few years after the Petroleum Industry Law was passed and with the country still gearing up for war, the Ministry of Defense and the fuel Department of the Ministry of Commerce and Industry formed a partnership of ten Japanese oil-related companies. The partnership--consisting of Nippon Sekiyu, Kokura Sekiyu, Chosen Sekiyu, Aikoku Sekiyu, Sayama Sekiyu, Mitsubishi Sha Holdings, Mitsubishi Shoji Trading, Aratsu Sekiyu, Maruzen Sekiyu, and Mitsubishi Mining Co.--was called Towa Nenryo Kogyo Co. Ltd., a name later changed to Tonen Corporation. The new company had capital of ¥50 million and 59 employees. Keizaburo Hashimoto, president of the Nippon Sekiyu Co. Ltd., was appointed chairman of the board, and Fusazo Kokura, president of Kokura Sekiyu Co. Ltd., became president. The larger corporate investors dispatched managerial officers to the company.

At the start of the refinery operation, sales and the procurement of crude oil and finance were supported and ensured by the Japanese Ministry of Defense. The choice of an industrial site and the question of which technologies to adopt for the refinery operations, however, were major concerns. As the result of cooperative discussions among shareholders, a research and development center was located at the Shimizu plant site in the Shizuoka prefecture, and the refinery facilities were located in the Wakayama plant site in the Wakayama Prefecture.

In September 1939, the production and distribution of oil products in Japan fell under the influence of the national policy promoted by the fuel department of the Ministry of Commerce and Industry. All Japanese oil companies' independent business activities were severely restricted. The effects of the national policy were limited, however, in the case of Towa Nenryo (Tonen), which was heavily engaged in munitions production.

On Tonen's Shimizu site, research and development activities started as a result of the serious shortage of natural resources caused by the war. The major projects at the research and development center were the substitution for petroleum products of other materials, such as high-octane gasoline developed from artificial oil and lubricants made from raw natural rubber; and the processing of heavy tar oil produced in Southeast Asia and volatile oil, made from pine-tree gum. The construction of the Shimizu refinery was hindered by the shortage of materials under wartime conditions and was not realized on a large scale until 1950.

After the war ended, Tonen experienced a considerable fall in sales when the need for airplane fuel for munitions use ceased abruptly. Three-quarters of Tonen's 2,600 employees were dismissed in 1945. The major board members, including chairman and president, were banned from public duties by the Supreme Commander for the Allied Powers (SCAP) because of their involvement in Japan's war effort, and they were obliged to resign from the company. Nobuhei Nakahara became president. SCAP prohibited crude oil imports to Japan and banned refinery operations on the Pacific coast site. Tonen almost ceased to operate until 1947.


Ok, if you read all that, time to take a deep breath.

No wonder some people were confused (and most still are). Two generations later, we still act as if oil is abundant, an endless source of joy & happiness for all. We are not well prepared for any other kind of lifestyle.

We don't know how to grow our food, and we keep on pretending that we really believe that this kind of lifestyle will go on forever (at least, it seems most people vote for politicians that say such things).

Our schools should teach the kids about alternatives, and local and national governments should stop rewarding bad behaviour, and quickly help us all prepare to change.

Tonen General does, however say this, that I agree with. In their programs for environment, safety and health, they note that

TonenGeneral works to preserve the environment by setting goals and implementing programs, and manages outcomes for the following issues. I wish the driver of the truck this morning had included "reduce" in the tape message played over and over again. 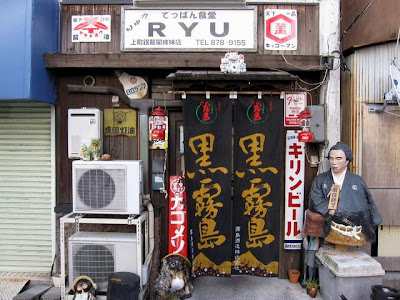 Pandabonium said…
Fun read. Thanks for a fascinating history lesson.