Hideaki Tokunaga has been around as long as I can remember, at least since 1988, when he had a hit with Kowarekake no Radio. This summer he performed live at the ancient Buddhist temple in Nara, a sacred site and a UNESCO World Heritage Site. This song is Hoshi to tsuki no pierce to kimi no yume.

星と月のピアスと君の夢 (anyone has any idea how to translate that?)

Do watch 情熱 (Juunatsu) Passion, from the same concert in Nara.

Yakushi-ji was built in the 8th century, and the East Pagoda (known as "frozen music") is still intact today, some 1300 years later. The official website mentions how the ancient stupas of India was an inspiration for these buildings, with sustainable architecture that most modern designers could learn a lot from. 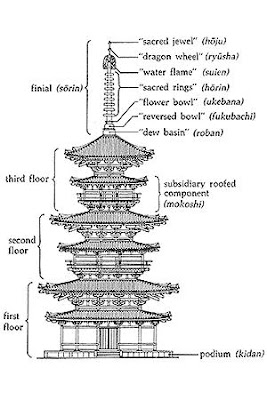 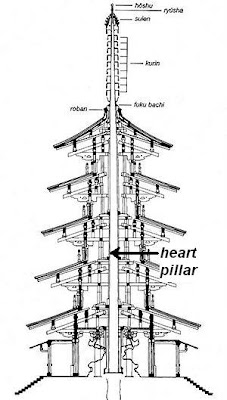 One of the main features is the massive, heavy hanging pillar in the center. This is the real secret of wooden pagodas. The hanging "heart pillar" is like the spine of the pagoda: Not only does it balance off the forces of earthquakes, it also is a powerful symbol of how your spiritual center, your core, should allow you to stay calm and not be moved by all kinds of influences or events...

The long, heavy wooden pole is freely suspended at the top, hanging from the upper part of the pagoda. The weight of the pole "exerts a compressive prestress" on the entire structure, increasing the bending resistance, while undergoing "pendular vibrations" to avoid damage... (From Vibration And Shock Handbook by C W de Silva)

Five-story Pagodas: Why Can't Earthquakes Knock Them Down? Wisdom from the Distant Past Ueda Atsushi, writing for Nipponia, notes a number of other clever structural inventions that help pagodas stay put in times of trouble:

The (...) Earthquake of 1995 brought down many tall modern buildings in the Kobe area, but not one of the 13 three-story pagodas in surrounding Hyogo Prefecture was damaged. What secrets protect three- and five-story pagodas from earthquakes?

The first secret lies in the material used — every structural part of the five-story pagoda is made of wood. When wood is subjected to a force it may bend and warp, but it does not break easily. And when the force is removed the wood returns to its former shape. Because it is flexible, it can absorb seismic stresses.

The second secret, a structural one, complements this flexibility of wood. The timbers are fastened together, with hardly a nail at all, by inserting carved thinner and narrower ends into slots. So if the ground begins to shake, the wood surfaces in these joints twist and rub against each other. This helps prevent the seismic energy from traveling far up the tower. There are about a thousand large mortise joints in a five-story pagoda, making the entire structure practically as flexible as konnyaku (see Note 1).

The third secret has to do with the layered structure of the pagoda. If you stand a long slab of konnyaku on end it will not remain upright, but five cubed pieces placed in diminishing sizes one on top of the other will. In English we say "five-story pagoda," but the Japanese word, go-ju no to ("five-layer tower"), is more accurate because the pagoda is basically a number of box-like structures laid one on top of another, much like the traditional stacked-up boxes called jubako (see Note 2). The "boxes" are all fastened together with mortise joints. When the ground shakes, each of these box layers sways slowly and independently of the others.

The fourth secret involves a wobbling effect. Each box layer permits a certain amount of gentle swaying, but if they sway too far off center they will fall over. Long ago, a carpenter expert in the construction techniques of the time happened to observe a five-story pavilion during a major earthquake. He reported that when the bottommost box layer swayed to the left, the one above it swayed to the right, the one above that one to the left, and so on. The tower was doing a kind of snake dance!

Hideaki Tokunaga Official site: "The Live DVD "Yakushiji LIVE" as a memorial to the consecration of a principle image of Buddhist..."

(Thanks Tom for reminding me of this!)

TenThousandThings said…
Great Minds think Alike :) I just finished an essay on my visit to Yakushi-ji temple for KJ's next issue (on the Silk Road).

In China and Korea, stone was used to build pagodas, but not in Japan--I read this is because pagoda builders were enchanted by the beautiful woods they found on the archipelago and wanted to work with them.

When I am in Kyoto and Nara, I dream about pagodas and energy emanating from them. I think they were thought to be transmitters/conduits of universal energies-- like lightning rods.

Translation Attempt: Stars & Moon fill my dream of You.

Martin J Frid said…
Thanks for the comment Jean, I'm looking forward to your article in Kyoto Journal.
11:12 am, November 28, 2009