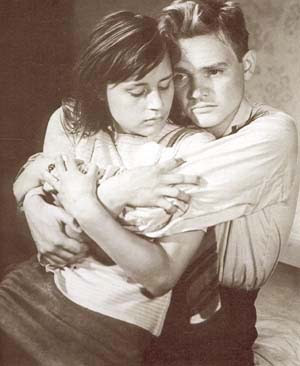 For a blog that is supposedly about all things 暮らし kurashi (life, living) there is precious little sex around here, as I think you can all find enough of that elsewhere on the Internet. But, ladies and gentlemen of the blog reading inclination, I thought my attempt at a Vintage Japan series of posts could benefit from a look at - Sex Education.

On a side note, the first photo here is from a Swedish film from 1953 called Sommaren med Monica, which was rather popular a long, long time ago (known in the US as "Monica: The Story of a Bad Girl" with arrests in Los Angeles when it was first screened at the Orpheum). How surprised I was to see it at Tsutaya, the video rental shop!

不良少女モニカ Furyuu Shoujo Monica (Juvenile Delinquent Monica) is the Japanese title, and it was a scandal here too, apparently.

Harriett Andersson is very lovely in this film, but frankly it is rather dull and there is very little nudity. OK, go and rent it or see if you cannot find it on the Internet. (Photo from Clara no mori, a blog about all kinds of beautiful vintage things, much recommended!)

Roland Domenig who knows a lot about cinema has written a great article in 3 parts over at Midnight Eye, a blog I like, about the History of Sex Education Films in Japan. It appears that the Meiji government was quick to understand the value of teaching the imperial subjects about issues like hygiene:

The enforcement of eisei, a newly coined term taken from the German "Gesundheitspflege" or "hygiene" introduced in 1872 by Sensai Nagayo, one of the key figures during the formation years of Japan's modern health system, became a central concern of doctors, bureaucrats and social reformers alike. Together with the promotion of modern science this resulted at the beginning of the 20th century in the establishment of the field of seigaku or "sexology" which was strongly influenced by the German Sexualwissenschaft.

Herr Domenig notes that this early seigaku or Sex Ed reached a peak before it was suppressed by the "nationalistic policy of the 1930s and during the war." I find it interesting that just like in Scandinavia or Germany, the social democratic political movement, with influences from further left on the spectrum, also reached Japan, with the Proletarian Film League (Purokino) trying to educate the working class in a more rational way.

In the mid-1920s, however, at the peak of the seigaku boom, so-called osan eiga ("birth films") attracted attention. Norimasa Kaeriyama for instance mentions these films in his book Eiga no Seiteki Miwaku (Cinema's sexual attraction) published in 1928. These were scientific films mostly imported from Germany and made primarily for doctors.

Fast forward to the post-war days. Herr Domenig has a lot of references to films that were mainly intended for doctors and the medical establishment in Japan. This changed gradually in the post WW2 occupation years (1945-1952) as Japan grappled with defeat and survival. We learn that Colonel Crawford F. Sams, the head of the Public Health and Welfare Section of General Headquarters, argued that the Japanese had three options to come to terms with overpopulation: food imports, emigration, and birth control. Since the first two were not possible in the immediate or near future, birth control was the only option.

At the end of World War II Japan was confronted with a serious problem of overpopulation. The repatriation of its citizens from the former colonies, a baby boom despite the miserable economic condition of the immediate post-war years and the resulting food shortages led to an intensive discussion of Japan's population problem. "Surplus population" (kajo jinko) became a media buzzword of the period. Birth control and family planning thus became urgent tasks and sparked the so-called basukon eiga ("birth control films")...

In the 1950s, Herr Domenig notes, movie theaters like the Asakusa Rokku-za, the Asakusa Romansu-za and the Shinjuku Central, all showed basukon eiga to sell-out crowds, while sometimes with "additional scenes" or "lascivious scenes" (senjoteki na bamen):

To add additional scenes seems to have been a common practice at the time, because the films were not only shown with the aim of enlightening the audience about sex education (as perhaps the program at the Kaguraza was), but also for less noble reasons.

Naughty, but good, in other words, from the audience's point of view. In 1952 a cinema in Shibuya presented a "Sex education film festival" (seikyoiku eiga taikai). Herr Domenig must have a copy of the original program, because he lists not only the price (Entrance fee, just 100 yen) but also the names of the four films: Sei no Honno (Sex Instinct), Hana aru Dokuso (Poisonous Plant in Bloom), Ratai (Naked Body) and Sanji Seigen no Chishiki (Knowledge about Birth Control).

There is more over at Midnight Eye, but I would just like to add - shouldn't Japan have tried harder to consider birth control or rather population control? Abortion was made legal in 1949, and Mariko Kato at The Japan Times notes that this was 10 years earlier than in other industrialized countries (I'm not sure about that: for example, Sweden legalized it in 1938). Today, abortion rates are lower in Japan than in the US or Britain. 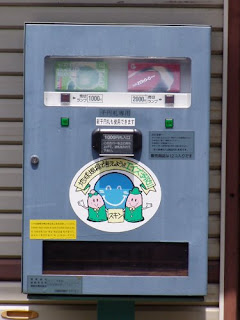 To conclude, Herr Domenig doesn't tell us how Sex Education is taught in schools today in Japan, and my guess is as good as yours. If I discover anything, I might add it as an update.

Anders said…
Excuse me but when did you move from Sweden? ;-)
Condoms have been readily available in supermarkets and gas stations as long as I can remember. They are not sold only at Apoteket and hasn't been for a long time. There are also old vending machines left at some places indicating that Apoteket didn't have monopoly on condoms before my birth either. (31 years ago).
8:03 am, November 22, 2009

Martin J Frid said…
By the way, did anyone notice the sticker on the vending machine, with a message to "protect yourself from AIDS" by using condoms, called スキン (skin). Those are two happy condom-clad manga dudes, with a big smile behind them...
5:48 pm, November 26, 2009