Whistleblower (Again) At Oil Agency: What Does It Mean For Japan?

November 12, 2009
Whistleblower, or just an anonymous source for The Guardian? The story is very similar to last year, as the International Energy Agency releases its annual World Energy Outlook. Is it just a clever tactic to get more media attention to an issue that governments do not want to talk about?

But first, look at the graph. What do you actually see here? The only "real" oil is the darker blue field. The reality is we will not be having even half of the petrolium in just 20 years. The graph says, start reducing consumption, now. 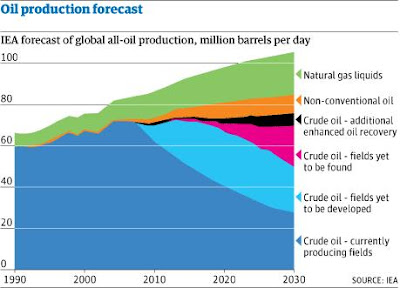 The increase in "other" forms of oil or energy is just a mirage. Note that the real oil supply is now officially expected to drop - a lot. This is not a graph made by "peak oil theorists" but based on official figures and estimates. Finally, we are being told the truth. Ladies and gentlemen, this is the big story of this week...

Actually, in February 2009 a very similar story hit the news, and I wrote about it over at Treehugger: Peak Oil: So Now It's Official (Or Not?) and almost exactly a year ago there was another whistleblower story related to the IEA (also promptly denied): World Will Struggle To Meet Oil Demand, Says International Energy Agency


Indeed, a strange case of anonymous tips to media, which then are used to slowly tell the general public something important.

China will never be able to "reach" the kind of oil consumption levels that the US or Western Europe had until now. But Japan is currently hoping that China's economy will continue to grow, and that they will continue to increase consumption. That's a model not based on reality. (Exporting Shinkansen technology is still a pretty good idea, but make sure the Chinese are building the trains rather than shipping them from Japan).

For Japan, Taiwan and South Korea, countries that rely to such a large degree on imported oil, we know it is time to start changing lifestyles. Buy a very good bicycle and forget about government incentives to buy a new "Eco-car" because car companies will not be able to handle this: there are no environmentally friendly cars. We will not even be able to maintain our asphalt roads (they need a lot of tar, another oil-based product that we take for granted in the era of cheap imports from the Middle East). Thinking of buying an expensive flat in a "Mansion" high above the ground? Probably not such a good idea - expect prices to fall as people want to move away from cities. Most important: start supporting your local farmers, and talk to them about how to grow food in a sustainable way, without a lot of chemical fertilizer (they need a lot of natural gas, also in increasingly short demand, to make NPK), and stop buying so much imported cheap stuff. Another thing to do is - prepare yourself mentally for your "kurashi" here in a very different Japan.

For example, The Asahi notes that METI's Agency for Natural Resources and Energy has prepared a gasoline rationing system using magnetic cards, to be used in a crisis. Note that their global energy predictions are still assuming increased oil demand, which, as we are now seeing, is not going to happen in reality.

But back to The Guardian's remarkable article:

The world is much closer to running out of oil than official estimates admit, according to a whistleblower at the International Energy Agency who claims it has been deliberately underplaying a looming shortage for fear of triggering panic buying.

The senior official claims the US has played an influential role in encouraging the watchdog to underplay the rate of decline from existing oil fields while overplaying the chances of finding new reserves.

Pandabonium said…
Great post. Not sure we won't see increased demand globally since China and India are expanding apace. Either way energy is going to be in short supply. That section on the graph referred to as "Non-conventional oil" includes some really UGLY stuff like Alberta oil sands and shales in the US and Venezuela - environmentally disastrous.

Jan Moren said…
Three points: plenty of energy around. The shift to other sources is going to be prolonged and painful, but while we are losing oil as a fuel source we're not losing energy altogether.

Also, oil as a fuel source is over. But oil as a raw material is not. The practical effect of peak oil is that it's being priced out as an energy source, but all its other uses as an ingredient - for plastics, medicines, lubricants and so on - are a lot less price sensitive. There'll be an oil market long after the last combustion engine has rusted.

If all the people of Tokyo-Nagoya-Osaka were to leave for the countryside you would have much higher energy use and create much more pollution and environmental damage than you have now.
10:55 am, November 13, 2009

P, good point, make that "None of us will eat a supper with food yet to be found."

Janne, I also hope we start prioritizing using oil for the essential items we need it for, rather than burning it. I'm not sure about the "soft landing" scenario though. Many people in suburbs live far away both from their work places and from where their food is produced - without cars or vastly improved public transportation, they are going to have to move. And I think we'll need more hands on farms, so they will be welcomed as they leave for the countryside. You raise interesting perspectives on a difficult question!
4:51 pm, November 13, 2009

I am catching up reading your blog and was caught especially by this post -- as well as your comment on the need to reduce consumption of bluefish tuna (I read that a portion of tuna represents around 2 meters of other sea animals (dolphins, sea turtles, other fish) that are discarded to produce that one meal.

I find it astounding that millions (if not billions) of people still don't realize the industrial world and industrializing world can't keep moving in the same direction. We have news shows in the States bemoaning the loss of the "American Dream" because of the "economy." Journalists don't understand that that "dream" was an unsustainable delusion.

Even more baffling are economists and political leaders who don't seem to realize this model of "development" (which never made sense) has cracked open.

A great thing that came out of the "Lost Decade" in Japan was a coming to terms with reality on the part of many ordinary people, in my view: downsizing, simplifying. I think this is why Japan is so far ahead of the US in awareness of sustainability issues.

Re Janne's comment -- aware people here are going "off the grid" in the countryside so it is more sustainable for them than in cities. Of course this is not happening in massive numbers. But with passive and active solar, rainwater collectors, and other sustainable technology, it is possible to reduce energy consumption and waste production tremendously.

We will be riffing on the issues you raise.

saurabh said…
this site is one of the best site for providing the complete layout for the software develpoment. i have visited the site for the first time and is impressed by it.
webdevlopment
4:13 pm, December 18, 2009