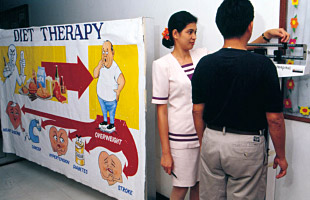 Earlier this fall, I had the pleasure of participating in a WHO/FAO Codex Alimentarius meeting in Tokyo. I have participated before, in all kinds of places, including Bratislava, Bonn and others... These conferences of government delegates are a bit like having your wisdom tooth pulled out... Takes a long time, feels good when it is over!

One thing that struck me though, apart from the dental care allusions, was that the World Health Organization really is trying to get one single message across. And that is related to diet. We are facing a massive health care disaster in Asia, if diets here are going to include more meat, more sugar, and more salt. Particularly meat. WHO has its hands tied but the message is still clear. Avoid more meat.

We have all heard the basic public message on NCD prevention: stop smoking, eat right, be more active. That message is as valid as ever, but that does not make a good news story. In reality, the true picture of NCD is more complicated than that basic message. Inadequate government policies and over-commercialization in a nearly unregulated market lie at the root of the epidemic. A wealth of potential stories may be found here. 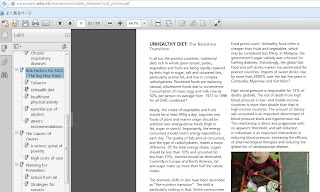 Noncommunicable diseases (NCDs), principally cardiovascular diseases, cancer, diabetes and chronic respiratory diseases, impose a major and growing burden on health and development in the Western Pacific Region.
NCDs are the leading causes of death and disability in the Region, responsible for 75% of all deaths in a region that is home to more than one quarter of the world’s population. Globally, NCD deaths are projected to increase by 15% between 2010 and 2020 (to 44 million deaths), with the highest numbers predicted in the Western Pacific (12.3 million deaths) and South-East Asia (10.4 million deaths) Regions. Of particular concern is the high level of premature mortality from NCDs (deaths before 70 years of age) in several low- and middle-income countries (LMIC).
This page provides links to publications and reports, news and events, as well as contacts and cooperating partners working on this topic in the Region. Also shown are links to related web sites.
Food sustainability