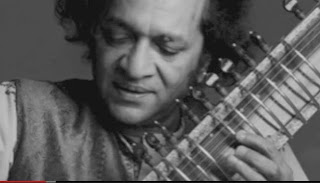 One of the world's most amazing musicians, Ravi Shankar, has passed away, at age 92. Imagine back in the 1950s or 1960s, most people in Europe or America had never heard any "world music" or "new age music" or any kinds of tunes from other parts of our beautiful planet. Sad, but true. We were that "euro-centric" or whatever they call it in Europe or the US of A. Music was still caught up in all kinds of barriers. Mankind has so much music to offer!

In comments, if you have suggestions of tunes by this master, I would be so glad to add them.

Ravi Shankar was one of those rare pioneers, who managed to convince audiences in the West that music in other parts of the world was worth listening to. Not only was he truly a master of his craft, but he also managed to deal with people, to get the message across. One such student was George Harrison. And, George may have helped Ravi to understand the legal realities of making music (and money) in the West.

My father, who still writes columns about classical music records for a local newspaper in Sweden, was touched by the track, Within You Without You in 1967, where sitars and tablas were used. As a teenager, to find that album, the amazing Sgt Pepper, on my father's shelf of thousands of LP records... That album just would not have been the same without that tune by George Harrison. No man is without flaws, but Ravi Shankar is as close to a saint as I can imagine.

Ravi Shankar & Philip Glass from the Album "Passages" (1990). The collaboration between Philip Glass, one of the greatest composer of the 20th century, and Ravi Shankar, THE greatest Indian musician of the 20th century, has produced a stunning masterpiece with genius. An intuitive combination of styles and one of the best examples of what one deems music to be. Listen & Enjoy it.

Ravindra Shankar Chowdhury was born April 7, 1920, in the Indian city of Varanasi.
At the age of 10, he moved to Paris to join the world famous dance troupe of his brother Uday. Over the next eight years, Shankar traveled with the troupe across Europe, America and Asia, and later credited his early immersion in foreign cultures with making him such an effective ambassador for Indian music.
During one tour, renowned musician Baba Allaudin Khan joined the troupe, took Shankar under his wing and eventually became his teacher through 7 1/2 years of isolated, rigorous study of the sitar.
"Khan told me you have to leave everything else and do one thing properly," Shankar told The Associated Press.
In the 1950s, Shankar began gaining fame throughout India. He held the influential position of music director for All India Radio in New Delhi and wrote the scores for several popular films, including Satyajit Ray's celebrated "Apu" trilogy. He began writing compositions for orchestras, blending clarinets and other foreign instruments into traditional Indian music.
And he became a de facto tutor for Westerners fascinated by India's musical traditions.
He gave lessons to Coltrane, who named his son Ravi in Shankar's honor, and became close friends with Menuhin, recording the acclaimed "West Meets East" album with him. He also collaborated with flutist Jean Pierre Rampal, composer Philip Glass and conductors Andre Previn and Zubin Mehta.
"Any player on any instrument with any ears would be deeply moved by Ravi Shankar. If you love music, it would be impossible not to be," singer David Crosby, a member of the Byrds in the '60s, said in the book "The Dawn of Indian Music in the West: Bhairavi."