The na-s of Japanese farming, and the threat from imported GMO canola

The na-s are a great family of veggies, that you ought to know more about. The kanji is simple and fun, 菜 "flowers" and "tree" and "claw" - we can all learn a lot from just that. Here, farmers grow a lot of na-s. They are part of the brassica family, that Swedish Linneus introduced, some 300 years ago in Latin.

Going beyond that, Japanese cuisine will embrace all kinds of na-s. Korean botanist Woo Jang-choon, or Nagaharu U, found out back in 1935 that there was a link.

This great family of healthy veggies includes cabbage, cauliflower, broccoli, Brussel sprouts
but also a lot of greens that you may eat in Japan, as part of a seasonal diet.

Joan of Farmers Markets has this to say about Komatsu-na, one of the many na-s:

Thankfully, I started helping at the farm where the farmers began teaching me not just about urban farming in Tokyo, but about the vegetables we grew. Komatsuna, a leafy green we grow in the winter months in Tokyo, was one of my first new friends, and remains a favorite. Originally developed in Edo (Tokyo's former name), komatsuna was formally named when a visiting shogun, Tokugawa Yoshimune (the very same one famous for planting maples and cherries in our fair city), stopped for a meal at a temple. Loving this new vegetable nearly as much as I do, he asked its name. The story goes that the monk answered that it had no name; it was just a green they grew and ate regularly. Like any shogun worth his salt, Yoshimune immediately righted the situation. Taking the name of the nearby river, Komatsu, and adding 'na' at the end, which means 'leaf' he bapitized it with the moniker it still goes by today.
Rightly so, Joy Larkcom in her ever useful tome, Oriental Vegetables: The Complete Guide for the Gardening Cook, refers to komatsuna and its compatriots as candidates for  '...the 'most underrated vegetable' award." She goes on to say that "They are among the hardiest and most productive winter vegetables I have come across, their flavour a happy compromise between the blandness of cabbage and the sharpness of most Oriental mustards. They are also very easy to grow."
While I take some umbrage with 'the blandness of cabbage', I otherwise agree wholeheartedly. Brasisica rapa var. perviridis, komatsuna's Latin name, is possibly Japan's most beloved member of the mustard family. It's lovely roundish emerald green leaves sit atop perfectly juicy stems. Usually the whole plant is harvested, snipped off just above the roots. We eat raw in salads - stem and all - or leave it roughly chopped in the bottom of a soup bowl. Whatever steaming brew is on the menu for the evening cooks it just enough to make it even more verdant and flavorful while still maintaining some of its characteristic crunch. As a member of the mustard family it has a wee bit of a flavor punch, but nothing extreme.

So, no wonder that there is a lot of concern that such valuable veggies are being contaminated by genetically modified canola imported from North America. Canola, or rape seed, is similar to these wonderful veggies, and there is huge concern because GM canola is found growing wild near harbours and transportation routes near food oil factories... 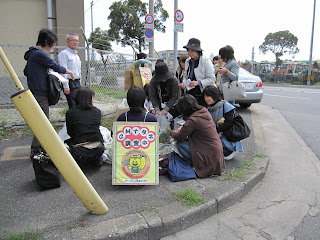 Wild-growing genetically modified canola plants have been found at many locations around Japan on numerous occasions. The first investigations by concerned citizens started in 2004. The spilling occurs mainly near harbours and by roads leading from the harbours to food oil companies. Japan’s importing companies and food oil companies that make canola oil, as well as the transport companies involved, are all directly responsible for the contamination of native canola (including rape seed, natane).

Japan has many small/medium size companies that make food oil from domestically grown rape seed. Also, many plants of related species are eaten traditionally in Japan. These food oil manufacturers, farmers and consumers – who want to eat healthy and safe food – are the victims if genetically modified canola continues to spread and grow in Japan.

The solution:
We are concerned about this issue at the local level. The issue is getting serious, and we must call for an end to imports of genetically modified canola. Crops that can contaminate local plants should not be imported. Meanwhile, we need strict rules for liability and redress to deal with contamination issues that arise from trade with the genetically modified crops. Rules are needed and they should be legally binding with effective compliance at the local and national level.

We have met with representatives from both food oil companies and trucking companies. Requests have been made for improving the handling practices, including better designs for the trucks. We demand that spilling cases should be dealt with immediately, and that any genetically modified canola plants growing wild in Japan should be exterminated.
Read the report here: 20101029 CUJ Canola Report Japan Final (pdf)

We need a lot more greens in our diet, and we need more farmers who can supply them. I cannot emphasize this enough. For your health, do eat more spinach, horenzo (惚れんぞ） and komatsuna （小松菜) and nanohana （菜の花） and all the other na-s you can find. Do look for them, and make sure they are a large part of your daily diet.
Consumer rights Food Food safety GMO