Energy: To Deregulate, Or Not...

Currently, if you live in Tokyo, or in Osaka, or in the boondocks north or south or on some tiny island, you have no choice but to get your electricity from the regional electricity provider. How old-fashioned, some of you foreigners may say: Back in the UK or Sweden or the US of A there may be so much choice! Wonderful, wonderful, choice?

Remember Enron? "America's Most Innovative Company" for six consecutive years... Not such a great idea, some of you may say. No wonder Japan has not yet decided to go in that particular direction. Also, this country being an island, there is not much hope of importing electricity from neighbors.

5 years ago, I blogged about Japan Natural Energy Company Limited...

So, should Japan follow the path suggested by free-market liberals (any better name for the ideological bunch of "thinkers", anyone?) who think this country also ought to "fully" liberalize its power retail market... Or am I missing the point? Could this mean we, the consumer, will have more "choice" and say, be able to avoid getting the juice from certain corporations that we have come to loathe and hate...

Yes, I'd like to be able to get my electricity from someone else, that runs solar, wind, and biomass plants.

But I can already do that. 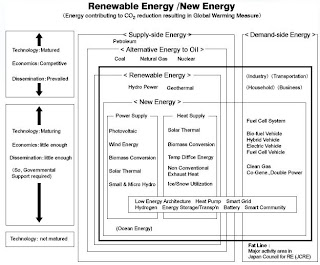 A new law for renewable energy in Japan? If you haven't heard about it, well, here are a few details. I'm still not convinced it is the real deal.

- "opens up" the power generation industry
- is meant to "reduce Japan's reliance on nuclear power"
- aims to achieve reduce Japan's greenhouse gas emissions by 25% by 2020 from the 1990 level
- will introduce a feed-in-tariff mechanism, common in Europe, that requires utilities to purchase at premium prices electricity produced from renewable sources

In 2007, on this blog, I introduced Natural-E. They are still going strong.


Japan's Green Power Certification System is a scheme for encouraging corporate and some other customers to use natural energy as one of their voluntary measures for energy conservation and environmental protection. With a Certification of Green Power, customers can show proof of their use of green electricity. This can serve various purposes such as meeting targets of fossil fuel savings and CO2 emission reductions...


I also wonder if this scheme (which is very good, but very small) for "Green Energy" in Japan will get a major boost or not. Say, from schools, colleges, restaurants, companies that make or import food, clothes, furniture - - - all kinds of businesses that should get involved.

So, what would happen to the huge regional energy companies, if deregulation were to happen, in such a hypothetical case... Create a market that would expose Japan to Enron-style corporations? Imagine the backlash of that.

Anyway, doesn't matter, TEPCO is now state-owned entity and has no other way to pay its bills, since cleaning up Fukushima Nuclear Plant Number 1 will most likely cost more than 100-200 Billion US Dollars, anyway.

TEPCO asked the government for more aid after estimating it may need at least 11 trillion yen ($137 billion) to cover costs from last year’s nuclear disaster at its Fukushima Dai-Ichi power plant.
The utility, which has lost 94 percent in Tokyo trading since the March 2011 disaster, may have to pay more than 10 trillion yen to decontaminate areas around the plant and compensate those affected by the disaster, it said in a two-year business plan through March 2015 released yesterday.

Decommissioning the four damaged reactors is forecast to be an “enormous cost,” exceeding its earlier projection of “less than 1 trillion yen,” the utility known as Tepco said in the report.
In a 10-year business plan approved by the government in May, the state-run Nuclear Damage Liability Facilitation Fund injected 1 trillion yen into Tepco in July and took control of the utility after the disaster left it almost insolvent. Without additional state aid, Tepco’s survival is again in doubt as it’s likely the estimated costs will exceed what one company can afford, the utility said.
“The government is likely to refuse to cover all the additional expenses” as extra aid would draw public criticism, Hirofumi Kawachi, an energy analyst at Mizuho Investors Securities Co., said before the announcement. At the same time, “the government has to keep Tepco alive” as compensation payments to those who lost homes and livelihoods would be at risk if the utility goes bankrupt, he said.
The government set aside 9 trillion yen previously as part of the bailout of Tepco and to pay compensation and cleanup costs related to radiation leaks.
On May 11, Trade and Industry Minister Yukio Edano, who oversees energy companies, indicated the government may pay part of the costs to decontaminate areas around the coastal plant while Tepco should be responsible for expenses to decommission and dismantle the reactors.

As part of measures to restructure, the utility will cut 100 billion yen in costs in each of the next two years in addition to a 3.4 trillion yen reduction over 10 years pledged in the long-term plan, it said.
After 2013, it will set up three companies within the utility for handling fuel and thermal power generation, transmission and distribution, and retail sales. The utility will consider a new corporate structure based on government reforms, which may call for an end to regional power monopolies, Tepco President Naomi Hirose told reporters yesterday in Tokyo. Under the fuel and thermal-power business, Tepco will expand the use of liquefied natural gas that has a low calorific value, such as that from shale gas in North America, to as much as 10 million tons per year, about half of its need, the utility said.

Did you get all that, all of you who still think nuclear power is all right?

Other utilities in the rest of the country, hey, I'd like to know exactly how they are doing, now that all of their nuclear power plants are shut down. A nice chance for accountants in Japan to show just how serious they are about their integrity...

So, what exactly are we talking about? 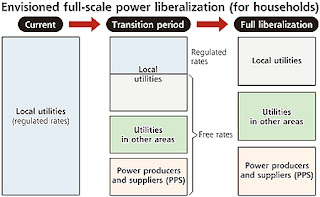 The Daily Yomiuri, a newspaper that is on the side of the nuclear village and the corporations, and the free-market liberals.... Suddenly argues that a "phased power system reform" may not be such a good thing... Because, in countries (like the UK, and just yesterday, Stockholm, Sweden) where it has been tried, there have been all kinds of power outages...

Ouch. I'm not going to go all sarcastic here, but isn't it interesting how right-wing free-market media, like the Yomiuri, sometimes manages to get caught, like deer in the middle of the road, late at night, in the headlights, unable to move...

If rates are deregulated, along with the separation of power generation and distribution, household electricity supply "turfs" will disappear. But this means utilities will no longer be obligated to provide power within their service areas.
But unless power shortages are resolved, healthy competition will not take place. The impact or direction of liberalization will also change depending on how the issue of restarting suspended nuclear reactors is dealt with.
In Europe and the United States, where the power business has been deregulated, power shortages and blackouts often occur without a significant drop in rates.