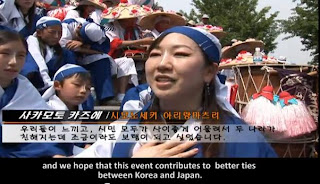 It may be useful to remember that Korea and Japan has had formal diplomatic relations, for a  very long time. This post is about the Joseon Tongsinsa. In light of events this week, where Communist North Korea may be - again - thinking of a nuclear bomb test, well, Beijing (who still supports North Korea) would have to deal with that puny effort to be taken seriously.

The mess that they are in, with little or no food for their population, and no hope for reunification with South Korea, the People's Paradise next door to Japan in in a state of flux. Meanwhile... 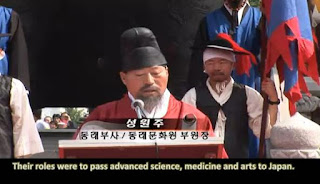 Here at Kurashi of course we tend to think about compassion and peace. There is no other way forward (paradigm paradox, or paradigm paralysis). Don't believe everything mainstream media tells you. We can do a lot of things to make all things better.

I'd like to highlight that in Seoul and Busan, many people are involved in all kinds of wonderful events to commemorate the Joseon Tongsinsa. People in South Korea dress up in costumes and play the roles of envoys that ventured to Edo Japan some 400 years ago. For Koreans, this seems to be very important.

Busan, in particular is making it clear that

The city of Joseon Tongsinsa (Diplomatic Mission dispatched to Japan), Busan is celebrating the 400th anniversary of Joseon Tongsinsa's interchange with Japan. Busan is now hosting a festival of peace between Korea and Japan with a variety of attractions to look out for.