Film: Yamada, The Samurai of Thailand Thailand and Japan have links that go way back to the 16th Century, and as Buddhist countries, of course there are deeper bonds that transcend time.

Based on a true historic figure during Ayothaya Era, here is a film that depicts the life of Yamada Nagamasa, a Japanese samurai who gained considerable influence in Thailand and became the governor of Nakhon Si Thammarat province in southern Thailand.

Yamada Nagamasa lived in the Japanese quarters of Ayutthaya, home to another 1,500 Japanese inhabitants (some estimates run as high as 7,000). The community was called "Ban Yipun" in Thai, and was headed by a Japanese chief nominated by Thai authorities. Yamada was born in Shizuoka prefecture in 1590. 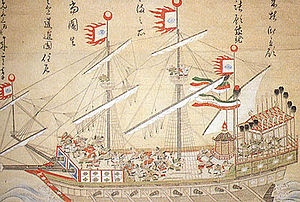 Wikipedia has more: The colony was active in trade, particularly in the export of deer-hide to Japan in exchange for Japanese silver and Japanese handicrafts (swords, lacquered boxes, high-quality papers, used by Rembrandt, among others). They were noted by the Dutch for challenging the trade monopoly of the Dutch East India Company (VOC).

The Japanese colony also had an important military role in Thailand. Yamada Nagamasa is alleged to have carried on the business of attacking and plundering Dutch ships in and around Batavia (present day Jakarta). The Japanese colony was highly valued for its military expertise, and was organized under a "Department of Japanese Volunteers" (Krom Asa Yipun) by the Thai king.

This epic film is a part of a greater set of films about Thai history, and the martial arts scenes may not be to everyone's liking. Thai boxing, in a new light. Well.. Good to see some East Asian history, not from a Western point of view.

I like how this Thai film shows how Yamada learnt from the Thai. But it rather accurately, I think, all things considered, depicts what Japanese at the trading post may have experienced in these parts of the world, with a matsuri-like event and taiko-drumming that evokes a fudasho pilgrimage of 34 temples... And, it also fills your heart with very different ideas about battle, or learning any art. You will need a teacher. "From now on, you have a teacher, you must be virtuous and never use Ayothaya's martial arts to bully others, but only use it for protecting the country and yourself..." 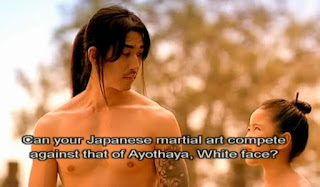 A few years ago a Swedish chap decided, after a few beers, to urinate on a large photo/poster of the King. Still in jail I believe...

One thing I didn't really realise until fairly recently - maybe I DID once know - is that just a few days or a week after Pearl Harbour the Japanese seized control of the British Colony Hong Kong. This was important as obviously the Japanese had watched on as the Brits controlled HK itself, the Opium wars, various trade benefits it had, ie also from India et al. So, why let them dominate that part of Asia, payback time...
11:48 pm, January 23, 2013