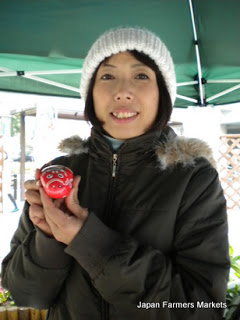 Want to know more about the farmers markets in Tokyo? Want to actually meet a farmer? Most people get their food from supermarkets or the local convenience store, only. How do you feel about that?

Head over to the Japan Farmers Markets blog. This weekend should be sunny but cold, so everyone is ready to go.

Joan from Michigan, has more:

The language may be different, but just under a different culture and maybe a different skin tone beats the same heart. Again and again I find people as generous and kind as any farmer in my home state, as hard-working, as weathered, as cautiously optimistic about the future of their livelihoods. It is, perhaps, how I stay connected with my own culture and history while living so far away.
One such farmer is Takako Kimura from Aizu Wakamatsu in Fukushima Prefecture. Takako comes to the Nippori Farmers Market each month with her vegetables, some yummy homemade pickles, and rice. She's charming, knowledgeable, and fun to talk with. (Yes, she's invited me to visit and help out on her farm.)  She's a young farmer determined, like all young farmers, to make a go of it.
Takako has held up remarkably well given the fear the name of her prefecture now engenders. After the March 11th disasters, she struggled to find a way to make sure her farm and the food she brought to market was safe. With the help of the Nippori Farmers Market and their support of Tohoku growers and producers, she's been able to regain some ground, farm safely, and keep bringing some of the cutest miniature daikon I've ever seen to her customers. 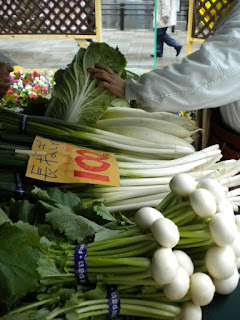 Consumer skepticism and distrust in government assurances that food was safe, that the situation at the power plant was under control ran high. The regions farmers, especially those like Takako and Sase from Fukushima, suffered a worse kind of fallout as customers turned away in fear. Questions about the level of radiation on her farm, in her vegetables, and what she was doing about it poured in along with words of comfort and support.
It was a sad, hard time, but Takako empathizes with her customers’ concerns. “Of course,” she says. “Of course, they were worried. The best I could do was answer honestly. I was never angry. I was only accepting and smiling from the bottom of my heart.”
There is a pause, though, as her eyes well up with tears and her voice won’t come as she remembers those days. “I was born in Aizu. I am proud to be from there, but people were afraid of my vegetables. They wanted to help, but they were afraid.”
The Nippori Market, Takako says, has made all the difference. Here she’s found a support that keeps her afloat financially and emotionally. She’s built up a set of regulars that come each month to shop, to buy, to ask how she’s doing. It’s more than she’s received from any other source, including local, prefectural, and national governments. Nippori Market has made her feel less alone.
“I’m always conscious now of my Tokyo customers in everything I do. When I plant, I wonder if they’ll like this vegetable. When I harvest I think about what they prefer in terms of looks and presentation,” she said.

Update: Nice to see that farmers markets are growing in popularity in the US as well, especially in places like California:

The number of farmers markets in the U.S. has increased more than four-fold since 1994, when the USDA began keeping track of their numbers. In August of 2012, there were 7,828 farmers markets operating in the United States. Nearly forty percent of the nation’s farmers markets are in metro areas which have a reliable consumer base.

The highest concentration of markets are found in California, New York, Massachusetts, Connecticut, Maryland, and Pennsylvania. The red areas in the map below show where the greatest increase in the number of farmers markets has occurred over the past four years.