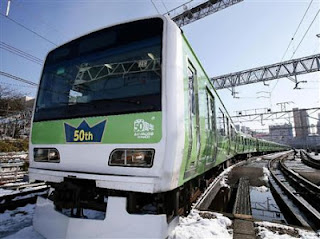 As we got a lot of snow on Monday (a public holiday) I was impressed that most trains kept running. Seibu Ikebukuru Line struggled to get me into Tokyo, and we were 25 minutes delayed, but got the job done. Well done, and much appreciated. While some lines were temporarily suspended, the Yamanote Line managed to keep running all day long.

The Yamanote Line is very special for people in central Tokyo. It runs both ways, clockwise and anticlockwise, and a full circle takes just about one hour. This year, it celebrates its 50th anniversary as the first trains started to run the full loop back in 1963, just before the Tokyo Olympics.

Sankei notes that the first tracks were laid down back in 1909 between Akabane and Shinagawa, and Ikebukuro and Tabata. Now, in 2013, a campaign to celebrate the anniversary will involve a "Lucky" train wrapped in special green colours. Others trace the history back to 1885 (electrification started in 1909). Current trains are from 2002, built by state-owned companies (in Niigata Prefecture), Kawasaki Heavy Industries and others. You'll be riding along at 90 km/hr on a E231 Series train, with some recent variations.

Turning to Youtube, a lot of train and snow, and a lot of fan videos. Further north, where conditions are often very harsh this time of the year, Japan's train services continue to deliver. I take Japanese trains a lot for work and pleasure. Did I mention, I'm impressed.