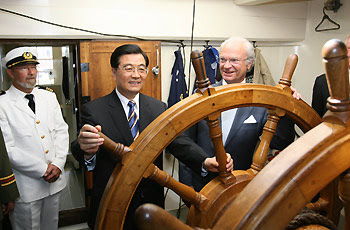 Chinese President Hu Jintao accompanied by Swedish King Carl XVI Gustaf steers the replica of the 18th century Swedish merchant ship "Gotheborg" as they attend a ceremony for the return of the vessel from a China tour, in Goteborg, Sweden, on June 9, 2007.

Earlier in the day, Hu, who was accompanied by a large trade and business delegation, met with Swedish business leaders. Among those he met were Peter Wallenberg, the patriarch of the powerful family financial dynasty whose holdings include telecoms group Ericsson, household appliances maker Electrolux, Saab Scania and the SEB bank.

Hu attended a ceremony where contracts were signed between Swedish and Chinese companies, including a one-billion-dollar deal under which Ericsson will supply China Mobile with equipment to expand the Asian company's GSM coverage in 19 regions of China. Another agreement was signed between mobile phone maker Sony Ericsson and China Postel Mobile Communications Equipment concerning mobile phone purchasing.

Perhaps more significantly, Sweden and China signed an agreement on environmental cooperation under which the two countries will exchange information and know-how.

Last year, I wrote about the Gotheborg visit to China on May 10, 2006 and July 18, 2006. Good to see that the journey was safe and that everyone got back to Sweden. Grattis!
China