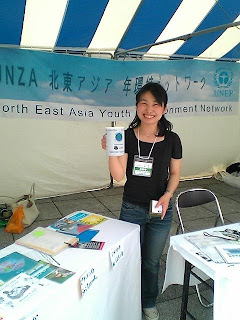 In 1994, young Japanese people created a network called Eco League (English website! Wow! Well done!).
Midori Kitahashi is their international team teamleader, and she will travel to the G8 meeting in Germany to participate. Next year, Hokkaido in northern Japan is host for the G8 meeting, so she hopes to meet many active people in preparation for that. Japan Youth G8 will also hold events in Japan in June 2008 in Tokyo.
Eco League is the main contact point for UNEP youth activities in Japan, with some 200 groups in the netowrk. I'm too old though, their age limit is 16-29!

Eco-League, which is the networking organization wich consists of most youth organizations in Japan. It was founded in 1994 by youth themselves. It holds national and local conferences, namely "youth ecology gatherings", several times a year, to which around 1000 youths participate to share their best practices and know-how of activities. It also has some projects, for example a pre-new worker's career support program for students, who want to work for an environment, Japan-Korea youth ecology gathering, a contest of student environmental activities. Youths reinforce their activities each other through this organization. (Source: Midori's blog)
Events G8 NGO Tokyo