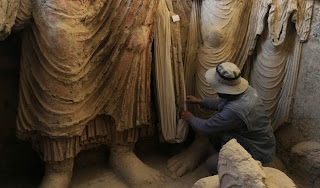 Buddhists who read Kurashi may want to take a moment to read this post over at Foreign Policy, and do click on the images of Professor Brent E. Huffman, a documentary filmmaker and assistant professor at the Medill School of Journalism at Northwestern University who has been making a film at Mes Aynak.

I hope to see that film.

Twelve years after the Taliban blew up the world-famous Bamiyan Buddhas, a Chinese mining firm -- developing one of the world's largest copper deposits -- threatens to destroy another of Afghanistan's archeological treasures.

...Huffman notes that some locals also support the mine. "Those who have found employment (albeit at a very low salary) at MCC or at the archaeology dig site are relatively happy," he says. "They can provide for their families. However, due to the terribly mismanaged relocation of six villages, there are many very angry locals who are currently attacking MCC with rockets and land mines demanding cash payments."
According to the New York Times, doubts about the government have also contributed to antagonism toward the mine. "There is deep skepticism that the weak state and notoriously kleptocratic ministries can build a functioning mining economy that will help ordinary people," the newspaper reported.

Mes Aynak, in Afghanistan's Logar Province, boasts one of the largest undeveloped copper deposits in the world. But it is also home to vast archeological ruins, including 5th century Buddhist monasteries and even older Bronze Age settlements. Preservationists -- working furiously to excavate the nearby ruins before they are buried under mining rubble -- have urged restraint in developing the copper deposits.

But those focused on Afghanistan's economic development have urged the country to move full speed ahead, citing the dire need for the $1 trillion in revenue that the mine could bring to the impoverished country. Is the potential for economic growth worth more than the loss of cultural heritage?
China reduce