More Images Of Buddha Statues In Afghanistan: Sign To Protect 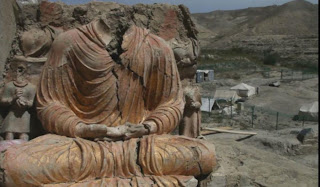 There is so much still underground at Mes Aynak. Over 5,000 years of history will be erased if Mes Aynak is destroyed in December of this year.

Most people remember when the then rulers of Afghanistan, the Taliban, used artillery to destroy the ancient Buddhas of Bamiyan. Now another huge and important archaeological site is under threat of destruction, but this time because of China's desire to mine copper. It's Mes Aynak, a site in Logar Province southeast of Kabul.

The China Metallurgical Group, known as MCC in English, aims to dig it up with explosives, with a target date of December this year. But archaeologists have only scratched the surface of the treasures of Mes Aynak. Brent Huffman is an award-winning documentary maker. He's working on a project called The Buddhas of Aynak, and he started by describing the ancient place.

Photo: A gold-plated seated Buddha overlooks the tents of the China Metallurgical Group Corporation mine.

It would take more like 30 years to properly excavate this amazing site, according to experts.

Photo: No explanation given, just a face of an ancient statue. Imagine if they found copper or some other valuable metal in Rome, and decided to destroy the Vatican, for commercial reasons.

Sign our petition to save the ancient Buddhist city of Mes Aynak (Province Logar, Afghanistan) from needless destruction while preventing irreversible environmental harm to Kabul watershed and the Afghan people.

We, the undersigned, acknowledge the urgent need for revenue generation for Afghanistan. We also recognize cultural heritage is a treasure for the ages, and no amount of revenue can compensate for an environmental catastrophe.

1.   We insist that the Mes Aynak mining project be conducted in accordance with international standards in a transparent manner that will safeguard public health, and ensure maximum protection for cultural heritage and the environment. International standards include publication of the final mining plan, the final, approved environmental impact plan, and the consensus advisory of archaeologists to optimize restoration of the site.

2.  We strongly urge the Afghan government to set up a coordinating body composed of government and mining officials, neutral experts in the fields of environmental safety, archaeology and geology, and representatives of the local population and civil society to oversee the implementation of International standards. This body shall ensure that the mining plan is followed throughout the entire life of the mine.

Issue Briefing on the Campaign to Save Mes Aynak
In November 2007 the Afghan government granted a 30-year lease for the Mes Aynak copper mine to the China Metallurgical Group (MCC). The hope is that this mine could become a significant source of revenue for a country that is emerging from three decades of conflict and trying to stand on its own feet.
However, the same site also holds a buried Buddhist city with multiple temples, fortresses and commercial and residential areas. Below that are older historic remains going back to 3000 B.C. and possibly including Bronze Age artifacts. Experts call this one of the premier archaeological treasures in Asia. When mining begins in 2013, this unique heritage site will be destroyed forever. Currently, a small team of salvage archaeologists is rushing to save whatever can be removed from the location.

The copper deposit also sits atop the aquifer that supplies water to the surrounding agricultural province and to Kabul, a city with an estimated 3 million inhabitants. Copper mining is hazardous and there is a real threat of a catastrophic environmental disaster if the proper methods of mining are not applied.

So far, NO environmental impact plan and NO mining plan has been made public. There has been NO discussion of variable mining technologies that might allow for portions of the site to be saved. Local residents and the Afghan population have NOT been informed of the costs and significant risks of this endeavor. An atmosphere of secrecy prevails and destruction is scheduled to begin in just a few months.

There is a better way forward – identified by a group of renowned international experts who met specifically to find a solution in June of 2012. Their recommendations are reasonable and should be followed by the Afghan government, MCC, and their supporting partners, the World Bank and the U.S. Department of State. 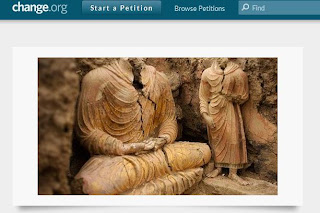