Feed In Tariffs In Japan Vs Abroad Rather High? 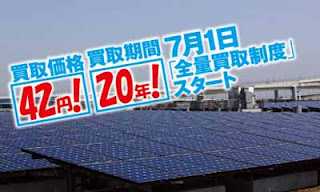 Just a quick comment here following the event on Sunday for Fresh Currents, the excellent work to try to combine and collate in English what is going on right now in Japan and the world regarding renewable energy.

One of the questions raised to Eric Johnson, who edited Fresh Currents, was about Feed In Tariffs (FITs) that are very important to get people to invest in alternative energy, like solar, wind, geothermal. All kinds of local energy solutions - that can help get us off nuclear power, or rather away from the energy monopoly that supported nuclear power - are going to benefit from FITs.

Yes, Japan's new law from July 2012 is rather generous and will provide 42 yen per kW/h (for solar) and that is good news. FIT levels for the UK, for example, are around 9-20 yen per kW/h for solar. A similar scheme for New York Long Island Power Authority will give users just 17.85 yen per kW/h for 20 years. For Germany, the rates have more or less been halved since 2004, and are now around 24 yen per kW/h for rooftop photovoltaic systems.

This is also happening in China, that apparently has a Feed In Tariff (according to New York Times: China Uses Feed-In Tariff to Build Domestic Solar Market) at 11.90 yen per kW/h.

Before this surge, solar energy laid on the bottom of China's list of domestic clean energy plans. While the nation manufactured 10 gigawatts of solar panels in 2010 alone, less than 1 gigawatt was installed here in total. Instead, cost-competitive nuclear power took the lead in the Chinese clean energy strategy, until a turning point appeared early this year.
As neighboring Japan was hit by a nuclear disaster caused by earthquakes and a tsunami wave, the world's largest nuclear power plant constructor China has halted its approval for new projects due to safety concerns. Meanwhile, four nuclear power plants, which were approved just days before the Japanese disaster, were ordered to freeze their construction efforts 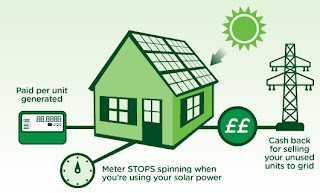 I tried to find data for South Korea, and it appears that South Korea's FIT system expired in 2011, according to pv-magazine. That's a real shame.

Image from Caplor Energy, with easy to understand explanations and videos.