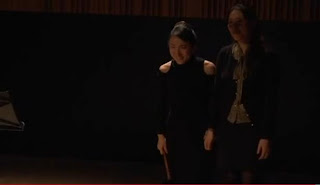 Yuki Isami, native of Japan, first discovered the world of music through piano lessons at the young age of four.

At the age of ten, she began studying flute under the tutelage of Rika Nakagawa.

After having obtained first prize from the Tôhô Gakuen University of Music in Tokyo, alongside Ryu Noguchi, Yuki Isami was accepted to the studio of Claire Marchand at the McGill Conservatory, and the following year, to the studio of Marie-Andrée Benny at the Conservatoire de musique de Montréal where she would receive the prestigious Prix avec grand distinction unanimously. After having completed her studies at the Conservatoire, Yuki continued her musical education, and obtained her cinquième cycle with a specialisation in orchestral excerpts.

Please join us for a special evening with the highly versatile Montreal-based musician, Yuki Isami. Yuki received rave reviews from the Colorado Springs arts community when she was here back in 2010 - performing to a soldout audience of 600 folks at Colorado College Armstrong Hall.

For Classically Alive, Ms. Isami will present a program of both Classical Music and Traditional Japanese Music. She will be assisted by Jim Bosse on guitar and Abe Minzer on piano. Ms. Isami will sing and perform traditional Japanese music on shinobue and shamisen, and play compositions on the flute by Japanese classical composer, Toru Takemitsu. Among other works, the program will conclude with a J. S . Bach Sonata for flute and piano.

And there is more, in French: