Updates From Hyderabad, From Consumers Union Of Japan 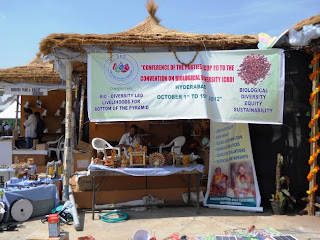 Oh, I just could not resist. "Hyderabad" sounds just terrific, it is somewhere in India, and I'm sure all my long-suffering Kurashi readers cannot wait to hear what this is all about. The Convention for Biological Diversity. 2 years ago it was held in Nagoya, and in 2014 it will be hosted in South Korea.

Hyderabad, like Nagoya, are places that are trying to rise to the occasion.

Japan, India, South Korea... We are in the right spot for United Nations conferences. This CBD is one I am particularly interested in, as it attempts to deal with biological diversity, and that included all kinds of important issues about food and food safety. I hope Asia can do better.

My own personal concern was always food - we eat some plants and rely on the farmers to save seeds. We need a lot of variety of seeds to keep our main foods healthy, and make sure that they are easy to grow. Some of the seeds may not be commercially interesting, but they still need to be farmed or kept growing or kept safe from developers who prefer to pave over everything with asphalt and concrete. Such seeds are part of what CBD is trying to protect. Biological diversity for food crops means caring for regions that have the wild varieties, the related species, the insects and the birds and everything that makes our wheat and rice and corn and green veggies 菜 and all kinds of wonderful, nutritious crops alive...

Now, increasingly most of our major food comes from biotech companies like Monsanto, that have patents on genetically modified crops, GMOs. The focus is not on diversity, not on wild varieties. BASF and Bayer and Monsanto are promoting the type of monoculture crops that are more like the Armstrong bicycle racers. Yes, you win, but there are all kinds of side effects (cancer, death). No variety, just a "win" for the strongest. But for biological diversity to work, we need a number of others to thrive. They may not have the most superior yield, but they are strong in other areas...

The genetically modified organisms are dealt with at the UN level at this convention, the Convention of Biological Diversity. It is called CBD. It tries to protect all kinds of plants from getting extinct, or getting contaminated by GMOs. CBD was designed to deal with living organisms, just like the more famous UN body for climate change was supposed to deal with CO2 and other dangerous, man-made gasses...

Image from IPS - India to Conserve Biodiversity at Grassroots

HYDERABAD, India, Oct 17 2012 (IPS) - India’s National Biodiversity Authority (NBA) is actively promoting decentralised grassroots livelihoods as the best way to  conserve biodiversity as mandated by the Nagoya Protocol on access and benefit sharing (ABS).
On Tuesday, Indian Prime Minister Manmohan Singh had announced at the 11th Conference of Parties (COP 11) to the Convention on Biological Diversity (CBD) India’s ratification of the Nagoya Protocol, and pledged 50 million dollars for national biodiversity conservation efforts.
At the 2010 meeting of the CBD in Nagoya, Japan, the parties had agreed to halve by 2020 the rate of habitat loss, restore degraded ecosystems and  work to prevent the extinction of threatened species.
But, finding the hundreds of billions of dollars needed to achieve the 20 ‘Aichi Targets’ of the protocol has proved problematic and so far dominated the COP 11 deliberations running in this south Indian city from Oct. 8 to 19, with over 174 countries participating.


If you have read this far, thanks a lot.

I'm sorry, but it is complicated. If you try to understand what is going on with the convention about climate change, well, this matter of saving biological diversity is not easier. So, for the past 10 or so years, I have made some effort to keep up-to-date.

Except, I didn't make it to Hyderabad in 2012. I had to go to Bucharest, Romania instead for another UN convention, the Ramsar, about wetlands... But a delegation of my esteemed colleagues from Consumers Union of Japan went... And came back, with lots of stories... Holding a huge conference in a developing country  - there are issues. Like power outages, that India had promised that the distinguished delegated would not experience. Like huge amounts of garbage, that said delegates take for granted will somehow magically disappear... (Does not happen)

Hyderabad made every effort to successfully host the 11th Conference of the Parties (COP11) and the 6th Meeting of the Parties (MOP6) and a lot of issues were covered. Here is what we posted over at Consumers Union of Japan (NGO/NPO founded in 1969, that you could all support by paying only 7,000 yen to become a member).

Highlights From The Negotiations In Hyderabad About Biological Diversity

Updates about GMOs from the Convention of Biological Diversity
It is not always easy to follow the details of the discussions and negotiations of international agreements… Media pays scant attention or ignores important concerns. Governments provide a massive amount of information but it is not easy to find or digest. Fortunately, NGOs are usually present both in the conference hall and in the corridors. For the current round of negotiations in Hyderabad, India, groups like CBD Alliance publish a newsletter called ECO with easy-to-understand updates.
ECO MOP6
ECO COP11
Here are some highlights:
For the initial meeting, MOP6, many worried that the so-called Roadmap about genetically modified organisms would not be endorsed. This Roadmap deals with risk assessment, to make sure that countries know what they are getting into if they import certain GMOs that may disturb or pose a threat to their local biological diversity. Without proper risk assessment, countries will not have the tools necessary to take into account recent developments in risk research.
There was anger that the United States (not a Party to the Convention of Biological Diversity) has voiced its opposition to work regarding the consideration of socio-economic consequences of genetically modified organisms. Philip L Bereano, Washington Biotechnology Action Council, notes that the US has sponsored literally thousands of socio-economic assessments as part of government policy to aid decision-making. Why not for GMOs?
During the main meeting of the COP11, there was also great concern that the negotiators would suddenly “rewrite history” by editing out an earlier text that many NGOs and governments feel strongly about, regarding so-called “Terminator” crops. These are genetically modified to not be able to produce new fertile seeds, thus undermining the ancient right of farmers to save their own seed from their harvest. Such GMOs, dubbed “Terminator” back in the late 1990s, would give biotech companies like Monsanto (that holds the patents to the Terminator technology) immense power over global food production. Activists in Hyderabad were indignant that instead of deleting old decisions, countries should implement what they agree on at the CBD meetings! Finally, it was agreed to retain the text, after swift action from six countries.
Regarding genetically modified organisms, ECO published the following list of countries in the Asia Pacific region and how they deal with genetically modified organisms (GMO) by 2012: 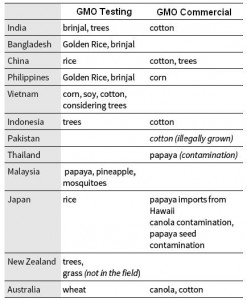 Read our proposals to the Japanese government before the Hyderabad conference:
Protect Biodiversity From GMOs: Hyderabad MOP6 Meeting 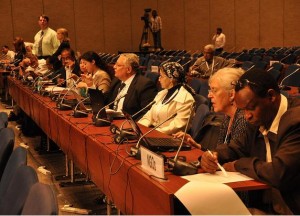 Pandabonium said…
"It's complicated". Well, yes it is, but the needs are fairly simple: a) NO GMO. b) Reduce contributions to climate change enough to reverse the trend.

Not really hard at all at the individual level! Just act according to one's values. Buy organic, or at least non-gmo ONLY - make the effort to find out what you are buying. And stop eating any form of animal protein, which itself will reverse climate change (and stop poisoning yourself to a major extent). Plus go further by your choices in energy use at home, transportation, and so on.

Screw the corporations and governments that they have bought. Act locally and spread the word FIRST - and then support those who engage the legal apparatus to make sure that you have the option to buy organic, etc.

Grow your own as much as possible to remove the control that the bastards have over your choices.

These issues are life and death, people. Act accordingly!