October 15, 2012
Over the past couple of years, the Norwegians have made such a hash out of the Nobel Peace Prize, giving it to anyone from Henry Kissinger to Jimmy Carter, and to at least three Israelis, and then to Al Gore (for what?) and more recently to President Obama, just after he had been elected, before he had done a thing. It was never awarded to the man we all know to have achieved independence for India and Pakistan back in the late 1940s, or to anyone else who fought for the end of imperialism, say in Africa. Japanese Prime Minister Sato got it for Japan's 3 anti-nuclear weapon principles. That list is long and convoluted:

War is a Crime.org: The Betrayal of the Nobel Prize

Now Stockholm's County Administrative Board, which supervises foundations and trusts in the city where the Nobel Foundation is based, has formally asked that foundation to respond to allegations that the peace prize no longer reflects Nobel's will.  The Associated Press reports that,
"The move comes after persistent complaints by Norwegian peace researcher Fredrik Heffermehl, who claims the original purpose of the prize was to diminish the role of military power in international relations.  'Nobel called it a prize for the champions of peace,' Heffermehl [said] … 'And it's indisputable that he had in mind the peace movement, the movement which is actively pursuing a new global order ... where nations safely can drop national armaments.' … 'Do you see Obama as a promoter of abolishing the military as a tool of international affairs?' Heffermehl asked rhetorically." 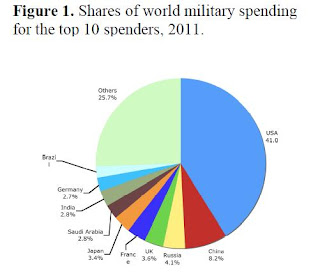 I'm sure we are all in agreement that small European countries not having fought any major wars in about 60 years or so is a great thing to celebrate. But the Norwegians should not be so easily fooled. These are countries that still engage in arms trade, exporting the stuff all over the world, as if there is no tomorrow. I am at a loss to even begin to understand the Norwegian logic.

They might as well have given it to Japan: less total military spending, lower exports of arms, fewer or rather zero involvements in conflicts over the past 60 years, compared to the EU.

Even better: award the Nobel peace prize to the Anti-Nuclear Weapons movement in Hiroshima and Nagasaki, or the Pro Article 9 movement in Japan or the Anti-Military Base movement in Okinawa, or in Jeju, South Korea. I could go on and on.

EU does have a Common Position on arms issues, you can read about it over at SIPRI, the Stockholm International Peace Research Institute, founded in 1966. Not good enough, if you ask me.

Anyone exporting arms should not be on the list of Nobel Peace Prize winners. SIPRI does however "congratulate" the EU, and its citizens, for the award.

There has not been an armed conflict between members of the EU (or its forerunners) since the end of World War II, building domestic peace for over 500 million EU citizens. ‘The awarding of the 2012 Nobel Peace Prize reminds us that the European Union is the most successful example of peacebuilding ever achieved in world history,’ stated Tilman Brück, SIPRI’s incoming director.

What I don't get is how countries that are major arms exporters can be said to be contributing to world peace.

Check this about the world's major arms traders: 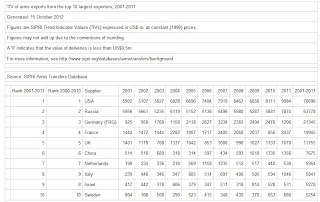 The SIPRI Arms Transfers Database contains information on all transfers of major conventional weapons from 1950 to the most recent full calendar year. It is a unique resource for researchers, policy-makers and analysts, the media and civil society interested in monitoring and measuring the international flow of major conventional arms.

The SIPRI Arms Transfers Database can be used to generate detailed written reports (trade registers) and statistical data (trend indicator value tables). To access the database click on the 'Enter the Database' button in the right-hand column and then select which output format you wish to generate and follow the instructions provided.
The database can be used to address a range of questions, including: