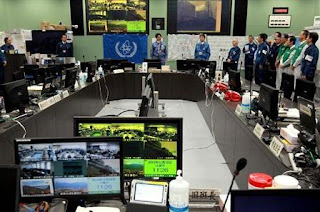 As the year of Heisei 24 is about to end, another Prime Minister goes to Fukushima to watch the damage, meet the people, and try to get to grips with something like an energy policy that will work for Japan.

We are all of course watching, not sure what we would do were we in his plastic-bag-covered shoes!? 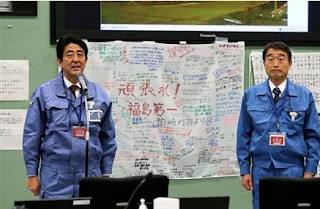 The clean-up at Fukushima after its tsunami-sparked nuclear meltdowns is unlike anything humanity has ever tried, Japan’s prime minister said Saturday during a tour of the plant.

“The massive work toward decommissioning is an unprecedented challenge in human history,” the newly-elected Shinzo Abe said. “Success in the decommissioning will lead to the reconstruction of Fukushima and Japan.”
Dressed in a protective suit and wearing a face mask, Abe was taken by bus to see two of the damaged reactors. Thanking workers for their efforts at this time of year, when many people are celebrating New Year at home with their families, he said: “Decommissioning work is hard work, but it is progressing. We owe it all to you. We, the government, will give full support.”

Shinzo Abe has all kinds of ghosts on his shoulders, including grandfathers and others in his family that ought to have taught him a lesson.

His grandfather Kishi went to Washington in 1960 and returned to Japan with a "new and unpopular" Treaty of Mutual Cooperation. Demonstrations, strikes and clashes continued as the government pressed for ratification of the treaty, and a visit by US President Eisenhower was canceled. That treaty was the key to get the US-Japan Mutual Security Treaty (AMPO) signed, which is why we still have American military bases in this part of the world. 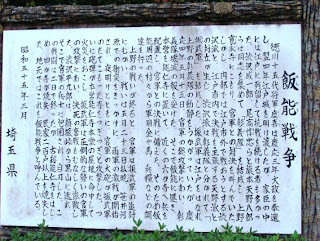 Abe stems from Yamaguchi Prefecture, a bastion of support for the Emperor in taking down the bakufu rule back in the 1860s.

I note that there are temples here in Hanno, Saitama where the last of the bakufu supporters from Edo fled to, after they lost the Ueno battle, only to be harshly defeated by the new class of rulers-to-be from Satsuma and Chochu, the domains from the far south and west, and that new generation that went on to create modern Japan.

In other words, a new leader from that part of the country carries certain connotations.

I also note that there are no cute babies for the new leader to hold and kiss, only an oba-san in old-fashioned (and likely very warm) gear. Love her hat, it could be the novel fashion item of 2013. 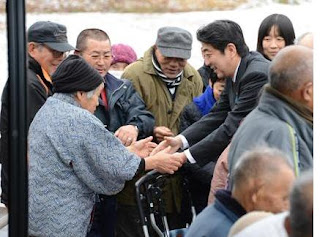 Abe's economics? I'm no expert, but Kurashi always rises to the occasion, don't we.

Here is Stephen Roach's approach to the new era of Abenomics:

With BOJ Governor Masaaki Shirakawa’s term ending in April, Abe will be able to select a successor – and two deputy governors as well – to do his bidding (...) The ECB’s über-aggressive actions have achieved little in the way of bringing about long-awaited structural transformation in the region. Crisis-torn peripheral European economies still suffer from unsustainable debt loads and serious productivity and competitiveness problems. And a fragmented European banking system remains one of the weakest links in the regional daisy chain. Is this the “cure” that Abe really wants for Japan? The last thing that the Japanese economy needs at this point is backsliding on structural reforms. Yet, by forcing the BOJ to follow in the misdirected footsteps of the Fed and the ECB, that is precisely the risk that Abe and Japan are facing. Massive liquidity injections carried out by the world’s major central banks – the Fed, the ECB, and the BOJ – are neither achieving traction in their respective real economies, nor facilitating balance-sheet repair and structural change. That leaves a huge sum of excess liquidity sloshing around in global asset markets. Where it goes, the next crisis is inevitably doomed to follow. 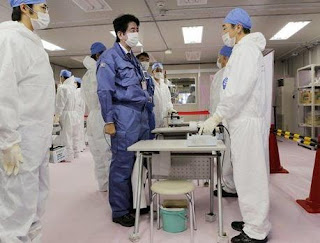 Photos from here and here.

Pandabonium said…
For Abe, the "economic solution" is a race to the bottom. Make the yen more worthless than the Euro or the Dollar, so we can increase exports. Then destroy local farming to make imported food cheaper by joining the TPP (toilet paper party).

A chicken in every pot and a nuke in every garage.