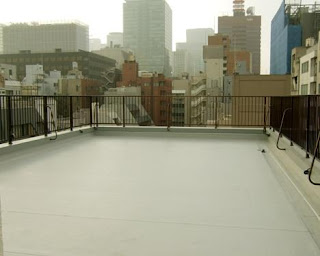 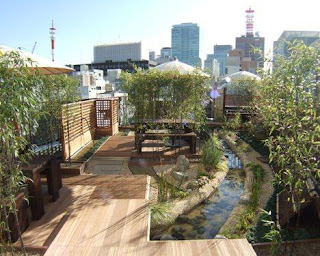 In 1971, sake brewer Toshimaya was prosperous enough to construct a brand new headquarter building in Tokyo. They probably took one look at the blueprints and thought it was the sexiest design ever: straight lines, simple features. Think modern, modern, modern.

Recently, however, they remodeled this drab, sterile (well, molding is probably more accurate) concrete cube with a terrific roof garden, as part of Japan’s movement to reduce CO2 emissions, called Minus Six Degrees.

This is an effort that quickly paid off, with staff clearly inspired to do more to reduce greenhouse gas emissions and think about environmental issues. The before-and-after photos are striking.

Previously, this was a company that promoted its rice liquor with snappy slogans like "For Mountains, it’s Fuji, for Shirozake, it’s Toshimaya."

Comparing your traditionally made sake to the tallest mountain in the country was probably good enough back in the 1970s. Recently, they felt the headquarter building was a “dead space” and decided to do something about it. How things have changed.

Established in 1596, Toshimaya Juemon, the founder of Toshimaya, firstly built a sake shop along the Kanda riverbank in what is now central Tokyo. Their fine sake is offered to Meiji Shrine, Kanda Shrine, and Hie Shrine for "sacred rituals." Toshimaya’s Shirozake is also presented to the Emperor and his family every year. Says Yoko Kimura:

The building was reborn with earthquake-proof reinforcement and environment-conscious type conservation of energy in 2004. Moreover, we started the rooftop gardening construction in December, 2006, and completed a Japanese style garden with a small brook. We want it to be a gentle space for the earth as a service to the people who visit us.

I like how the roof garden has inspired a Green Community among staff and others to think about sustainable development, and how the company uses resources like water and rice in a better way.
architecture progress sustainability