A Picture Is Worth More Than... 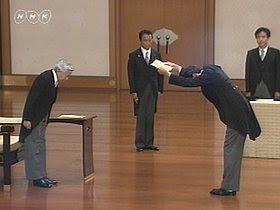 New government here in Japan, Prime Minister Hatoyama has a plan. Mr Dove Mountain bows deeply to the Emperor at the Imperial Palace in central Tokyo on Wednesday.

How about the choice of Minister for the Environment, Mr Sakihito Ozawa from rural Yamanashi prefecture, who got his masters degree here at Saitama University. I hope he speaks English as he will be leading the Nagoya UN Biodiversity/Cartagena Protocol negotiations in Nagoya next year. Can Mr Ozawa explain Japan's 25 percent cut from Japan's 1990 greenhouse-gas emissions levels by 2020 at the UN climate negotiations in Copenhagen?

Reuters AlertNet had this to say:

- He has chaired the lower house of parliament's environment committee and served as member of the Democratic Party's panel on climate change, although the party's climate policies have mostly been spearheaded by Katsuya Okada, the new foreign minister.

- Ozawa is expected to work closely with Okada in the new government as Japan tries to play a bigger negotiating role in U.N.-backed climate talks in Copenhagen in December. The talks will try to work out a new agreement on reducing emissions to succeed the current Kyoto Protocol, the first phase of which ends in 2012.

(I can't help wonder why they are all wearing European-style tuxedos, when this is a country with truly marvellous kimonos and hakamas with designs and materials from way back. Nice bow, though.)
Climate change politics

Tom O said…
You hope a senior Japanese politician/minister speaks english? AND one from Yamanashi?? All due respect but I have my doubts.. No his fault of course really. Reminds of when Miyazawa became PM in the early 90s his eigo was apparently really good. But, in his official capacity, he wasn't allowed to use it!! Because of course others wouldn't understand, ne. Still, whatever language is spoken in Kobenhavn one hopes nothing is Lost In Translation. It would be great if Japan does - irrelevant of other kuni's - take one giant step with emission reductions.

"this is a country with truly marvellous kimonos and hakamas with designs and materials from way back."

In my iken its those three last words. Way back = pre-Meiji era. Don't think boys and girls were wearing those uniforms way back either. But a certain 'bringing Japan up to speed with the rest of the world' kicked in, ne. In every respect (militarily who WASN'T at it in some respect, 'Prussia', the nefarious 'Empires' - remember that African carve-up around the same time..). So, when the Emperor hangs out with his brethren abroad you would think it would be very nice indeed for kimono/hakama to be present, ne. But thats not the 'uniform' that is required by etiquette. One has to play the game.
4:05 am, September 17, 2009

K and S said…
I think it may cost a lot more to have someone dress them in kimono than it does to put on a tuxedo.

Martin J Frid said…
Oh, they have plenty of kimonos and hakamas, remember the wedding ceremony of the crown prince? The bride was wearing the Heian era style 8 layer kimono, very heavy silk.
11:25 am, September 17, 2009

Pandabonium said…
Looks like the Emperor is about to demonstrate a karate kick on a piece of wood held by the PM.

I agree on the symbolism of clothing. Kimono would be much more appropo. Time for Japan to be a modern nation while still embracing its heritage rather than aping the rather silly formal attire of the west.