UN Summit Programme here if you want to know what world leaders actually said at the UN meeting, rather than just reading brief quotes that media provides for you. I had no idea our world leaders still rely on fax machines to send their messages: check it out.

10:39 EDT
Swedish PM speaking... "for everyday that goes by without us taking action the consequences will be more severe for all of us"

Maybe it's me, but there's nothing really new here -- even if everything Fredrik Reinfeldt is stating is entirely accurate, factual, there doesn't seem to be buzz around it -- everyone seems to be taking calls in the press room right now.


10:18 EDT
Yukio Hatoyama, the new prime minister of Japan, has taken the podium -- but frankly, the atmosphere has sagged a bit post Obama and Hu. Which is a bit of shame because...

On emission reduction targets: Developed countries need to take lead. Japan should commit itself to 25% by 2020 (good!) by 1990 levels. (This is met with clapping...)

Developing nations must reduce GHG emissions based on differentiated responsibilities... (which is UN-speak for acknowledging that nations should reduce poverty and grown their economies, but can't do so willy nilly, without regard to emissions). 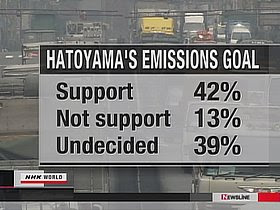 In favor of human survival: 42%

Against human survival, including one's progeny: 13%

Not sure if survival of life on Earth is a worthwhile goal: 39%

Pandabonium said…
Hadn't thought of that, given all the deniers in the world, but perhaps that is true. Would be encouraging.
10:09 pm, September 24, 2009