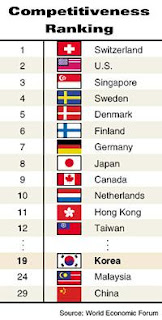 Sweden is ranking very high on this year's list of competitive countries. Japan is doing very well too, and South Korea is scoring among the top 20.

In its Global Competitiveness Report 2009-2010, the Geneva-based institute said Sweden ranked 4th in competitiveness among 133 countries. This is based on a combination of available data and a survey of over 11,000 business leaders in 133 countries across the globe. Japan "won high marks for technical innovation, but its competitiveness was compromised by its huge budget deficit," according to NHK World, while China ranked 29th, India 49th, Brazil 56th and Russia 63rd.

Makes me wonder why we are all so busy, working so hard...

Why bother!? What would happen if we all slowed down a bit, decided to help each other a bit more, and make sure everyone is ok...?

Anonymous said…
I like your last two sentences.
I totally agree with you that too much energy is being put into striving for the very best when really we should all stop and think and look around us and realise that the vast majority of people do not get to the top.
6:10 am, September 09, 2009

Pandabonium said…
"Competitiveness" - being a good place for a corporation to make profits?

Better that we have countries that are good places for people to live happy, healthy lives and protect those things which will allow future generations to do the same.
5:25 pm, September 09, 2009

Björn Nilsson said…
Well, we could just slow down, relax, have a good time and let the old exploative world system fall off the cliff, or ...? It's OK to me, anyhow.

The only thing which happens when you work faster is that someone asks you to speed up the tempo!
5:32 am, September 16, 2009