A World Outside Of Tokyo: PNB Gallery In Chichibu 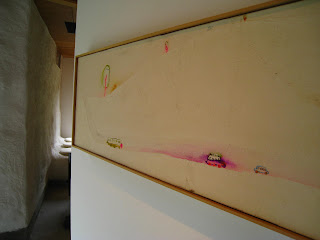 If you live in central Tokyo you probably know that there is a lot more to Japan than Midtown or Roppongi Hills, but do you ever venture out and try something different?

We may be in the middle of the collapse in world trade, but how about the surge in interest in art, music and culture?

Just an example: if you like French art, you already know that there is so much happening all over the country:

And if you live in the UK, you might have heard of Japan Festival, no doubt!

Japan Matsuri 2009 surpassed our wildest dreams. We anticipated that the maximum number of festival-goers would be around 15,000. In fact, we had more than twice this number, all of whom enjoyed the delicious food and wonderful entertainment throughout the day. In the four weeks leading up to the festival we had more than 45,000 people [...]

I like how artists like Joji Hirota drums his way into the hearts and minds of the stiff-upper-lip British, or maybe he is just reaching the crowds that aren't quite as uptight?

How do we go beyond the "local" that limits even the great cities in the world, and make it more "global" and less about ego or pride?

Tom, old friend and frequent commenter here on Kurashi, introduced me to this:

Hirota was born in Hokkaido, the northern island of Japan. He studied percussion and composition at the Kyoto Arts University and was invited to come to Europe as a musician at the Red Buddha Theatre, and also The Lindsay Kemp Dance Co as a percussionist, where he later became musical director, which won the Time Out Award for the best dance company for their production of ONNAGATA for which Hirota wrote and performed the music.

Now, as well as concert performances, an increasing demand for his compositions has seen his musical creations evolve into even more dynamic and versatile works, ranging from orchestral pieces for theatre and television, piano pieces, flute and string ensemble music, as well as Taiko. Projects include the Royal Shakespeare Company, the Wildlife and Survival documentary TV series- a collaborative project with composer Anthony Phillip, BBC Drama and other commercial works reaching worldwide. On Japanese TV, NHK used his music for the Kumano Kodo episode of the World Heritage series.

I happened upon PNB Gallery in Chichibu, and liked their website. So I thought I should share. Yes, this is really far from central Tokyo ;)

How local do you want to get? The crepe is made from buckwheat grown in Chichibu, and the coffee is fair trade, organically certified.

PNB Cafe. There is a lot to see if you like green hills turning red and orange in the fall, and river rafting on the Arakawa, the old-fashioned Chichibu way, at Nagatoro (more over at Secret Japan or at Tokyo Work Life).

Yet, it was the art that caught my attention.

Russian Sphinx said…
Do you think that Russian art is popular in Japan? Are there any Russian cultural events in Japan? I tried to find something in the internet but I don't speak Japanese so it is a bit difficult to me:( Please let me know if you hear about that kind of events.
9:29 pm, October 01, 2009