"Formation and evolution of galaxy disks" 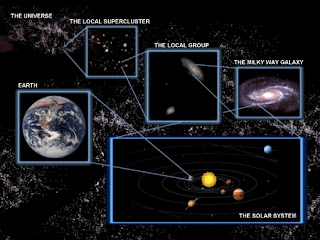 BBC reports that over 200 scientists from 26 countries including the United States, Britain, Italy, Germany, Russia, and Japan have gathered in Rome for a five-day meeting on disc galaxies. Disc galaxies, like our own "Milky Way" are amazing in size and power - and how did life emerge here, on a small planet in a tiny solar system...? The conference is called "Formation and evolution of galaxy disks". Abstracts is where you can read brief summaries of what they are talking about, such as more abstruse concepts of space and time involving how galaxies, stars and planets came to be formed and evolve.

I didn't know the Vatican had its own observatory - and it is located in Arizona, the U.S.

Image of "Our Place in the Universe" from the Columbia University Astronomy Lab website of Aeree & Ben.

My favourite book way back in High School was The Tao of Physics by Fritjof Capra, where he describes a number of fascinating parallells between moder science and ancient philosophy.

From the Preface to "The Tao of Physics":

Five years ago, I had a beautiful experience which set me on a road that has led to the writing of this book. I was sitting by the ocean one late summer afternoon, watching the waves rolling in and feeling the rhythm of my breathing, when I suddenly became aware of my whole environment as being engaged in a gigantic cosmic dance. Being a physicist, I knew that the sand, rocks, water, and air around me were made of vibrating molecules and atoms, and that these consisted of particles which interacted with one another by creating and destroying other particles. I knew also that the earth's atmosphere was continually bombarded by showers of "cosmic rays," particles of high energy undergoing multiple collisions as they penetrated the air. All this was familiar to me from my research in high-energy physics, but until that moment I had only experienced it through graphs, diagrams, and mathematical theories. As I sat on that beach my former experiences came to life; I "saw" cascades of energy coming down from outer space, in which particles were created and destroyed in rhythmic pulses; I "saw" the atoms of the elements and those of my body participating in this cosmic dance of energy; I felt its rhythm and I "heard" its sound, and at that moment I knew that this was the Dance of Shiva, the Lord of Dancers worshiped by the Hindus.

I had gone through a long training in theoretical physics and had done several years of research. At the same time, I had become very interested in Eastern mysticism and had begun to see the parallels to modern physics. I was particularly attracted to the puzzling aspects of Zen which reminded me of the puzzles in quantum theory. At first, however, relating the two was a purely intellectual exercise. To overcome the gap between rational, analytical thinking and the meditative experience of mystical truth, was, and still is, very difficult for me.
Universe

Pandabonium said…
I like that book too. Another that I haven't read yet, but which comes highly recommended is:
"Choosing Reality:A Buddhist View of Physics and the Mind" by B. Alan Wallace
10:06 am, October 03, 2007