Stephen Hesse in The Japan Times 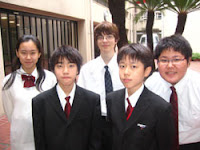 If you live in Japan, you are probably reading Japanese newspapers like The Japan Times, The Asahi, The Yomiuri or The Mainichi to get your daily fix of news, culture and comics from back home. Plus sports and job ads and whatnot... The Japan Times has the best coverage of environmental issues, as far as I am concerned. Stephen Hesse is one of their regular contributers. You know how it works. You see a headline on the web, and if the byline (the name of the writer) is familiar, you tend to read the rest of the story.

You can read his columns here: Our Planet Earth, and the story that caught my eye today was a narrative of how Mr. Hesse was inspired by a bunch of Junior High School students. A good read.


The day after the Nobel Prize was awarded to Gore and the IPCC, I visited Hiroo Gakuen in Tokyo, a combined junior- and senior-high school, for the school's autumn festival — this year themed "Earth's Happiness is Our Happiness."

A friend whose daughter graduated from the school thought I might like to see what young people these days are thinking about environmental issues.

I was immediately struck by how Japan has changed. Today, junior- and senior-high school students are studying dioxins, the ozone layer and "corporate social responsibility." When I first began teaching environmental issues in Japan 17 years ago, first-year university students would identify old men on bicycles and bad breath as pressing environmental concerns.

At Hiroo Gakuen I also met Joel Plunkett, one of several teachers coordinating the school's International Program, an English-based curriculum for foreign students and Japanese students with strong English skills. The program is new this year, with seven students entering the junior high school and four entering the high school.

On the way home it struck me: The people I really wanted to hear from were these young people who will inherit this planet. The next day I sent Plunkett an e-mail and asked if any of his students would be willing to share their thoughts on the Nobel Peace Prize and climate change with readers of The Japan Times.

If you want to hear the rest of Mr. Hesse's story, please click here!
Climate change