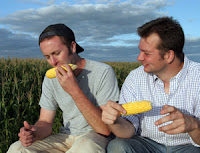 King Corn is a feature documentary about two friends, one acre of corn, and the subsidized crop that drives America - and to some degree, Japan, that imports 94.1% of its corn from the United States (mostly for animal feed and food oil that anti-GM campaigners here want the Japanese government to prohibit or at least require full GM labelling for).

In the film King Corn, Ian Cheney and Curt Ellis move to Iowa, where both their great-grandfathers once lived, to learn where their food comes from:

With the help of friendly neighbors, genetically modified seeds, and powerful herbicides, they plant and grow a bumper crop of America’s most-productive, most-subsidized grain on one acre of Iowa soil. But when they try to follow their pile of corn into the food system, what they find raises troubling questions about how we eat-and how we farm.

Check their blog for links to the reviews - I'm amazed at the attention this film is getting. The Village Voice reviewed King Corn in its Film section, and critic Robert Wilonsky offered a warning: King Corn will put you off corn for a long, long time. And: “...This is as much a thoughtful meditation on the plight of the American farmer as it is a rant against our expanding waistlines.”

King Corn opened October 12 in theatres around the U.S. And, as one U.S. farmer admits, with a grin: "We aren’t growing quality. We’re growing crap. Poorest quality crap the world’s ever seen."
Food GMO

Martin J Frid said…
Looking forward to your take on the energy aspects of corn farming, and the biofuel madness.
2:35 pm, October 20, 2007