October 30, 2007
My good friend Tony Boys is in Thailand at the moment and he sent some beautiful photos taken just a few days ago from a Karen village in northern part of the country. Tony is studying the agricultural methods of the Karens, who are basically self-sufficient when it comes to both food and seed. The Karens have a lot to teach the rest of us about sustainable food production. This being the season of harvest, I bet their food tastes wonderful too. 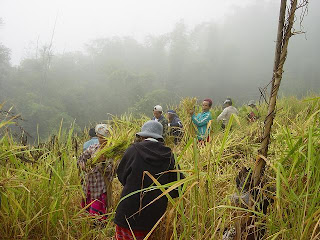 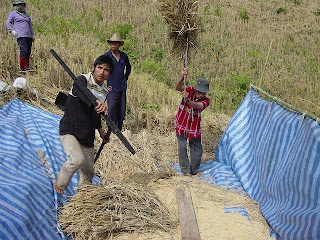 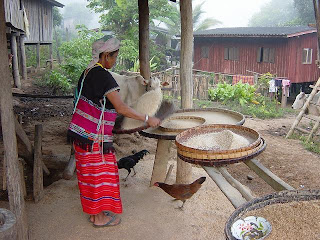 I'm thinking of food security and the fact that most of us cannot farm and we rely on a shrinking number of farmers to do the hard work for us. We should all consider what happens to farming as oil prices go through the roof. I am also concerned that many farmers cannot really "farm" in the truly self-sufficient way of the past. This includes knowing how to save seeds for the next season.

Garden farming in particular often uses F1 hybrids. Have a look at your seed bags - these are seeds especially developed so that the fruit or vegetable looks and tastes great. But if you try to save seed from F1 hybrids, and plant them again, you will not get the same result.

Many F1 varieties do not survive more than one generation - however, they are not sterile in the sense of genetically modified seeds that use Terminator technology.

If farmers are not saving seeds, who is? Who controls modern agriculture? Biotechnology has introduced genetically modified seeds, that can only grow one generation.

Monsanto, the US biotech company (that produced chemicals including plutonium for the Nagasaki atomic bomb and Agent Orange for Vietnam) has recently bought Delta & Pine Land, the company that developed Terminator seeds together with the US Department of Agriculture.

From 1943-1945, Monsanto's Charles Allen Thomas coordinated Manhattan Project work on plutonium purification and production and, as part of the Manhattan Project's Dayton Project, also coordinated development of techniques to industrially refine polonium for use with beryllium in the triggers of atomic weapons.

Wikipedia: Charles Allen Thomas, Monsanto President and Chairman of the Board, and a "noted American chemist and businessman. "

F. William Engdahl has exposed the politics behind GMO research and ‘food as a weapon.’ "Terminator is merely the logical next step in food weapon technology", notes Engdahl.

Sterile seeds - it sounds like something out of a bad science fiction novel. And people wonder why the resistance to GM food is so strong? This is also why I think we, as consumers, need to pay more attention to organic and sustainable farming methods.

But how can we afford anything else? 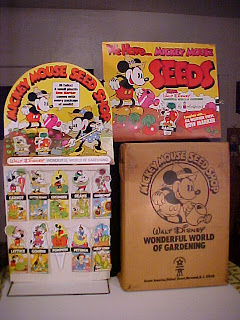 Update: "The bottom of the three photos, for example, it was fascinating to watch the "aunt" (yes the Pgaz K'Nyau have their word for "obasan" too) in the picture who was really skillful at separating out about four different things from the pounded rice, the chaff, the bran, broken rice and the good white rice for human food. How would you do it? At one point she kind of rotated the winnowing tray so that chaff collected in one spot and then scooped it out with cupped hands and seived it to separate the contents! We do it with machines now. Saves time but isn't much fun. Of course most people have almost zero awareness that this is happening anywhere, but that's because they think "food comes from the supermarket." Well, they know better than that, but not much better because they have very little idea of what's going on behind the scenes - what they're missing, what they've lost, what they might have to "relearn" if they want to survive..." - Tony
Food GMO Nagasaki Organic