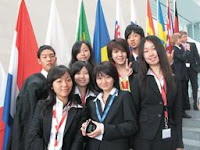 "J8 was a great chance not only to think about world issues but also to understand other cultures... I don't want to stop thinking about the world and find solutions of world issues. I will never forget these 11 days."

Imagine having an audience with some of the most powerful leaders on the planet, where you have the opportunity to tell them what you think about the future of our planet. This is exactly what happens at the J8 summit each year!

The Junior 8 (J8) Summit is the parallel youth event to the G8 Summit. Asahi writes about the Japanese Junior High School students who participated at the conference earlier this year. The kids are saying that they were inspired to make environmental issues a main theme for their school festival, with clubs investigating dioxin levels and water quality. They also got the entire school to watch Al Gore's documentary about global warming.