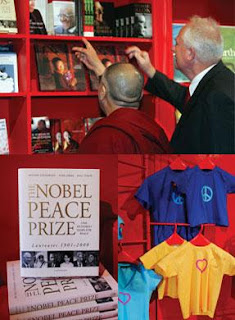 The Nobel Peace Prize for 2007 is to be shared, in two equal parts, between the Intergovernmental Panel on Climate Change (IPCC) and Al Gore (in that order) for efforts to build up and disseminate greater knowledge about man-made climate change, and to lay the foundations for the measures that are needed to counteract such change.

The UK weekly magazine New Scientist has a special section with news and updates about Climate Change.

I think we all think we know who Al Gore is, but what is the Intergovernmental Panel on Climate Change? IPCC is a UN-backed body that has organised a series of reviews about climate change. Since 1990, the IPCC has published four major reports summarising progress in climate change science. The reports are meant to represent scientific consensus about climate change.

The key findings of the latest 2007 IPCC report were that there is a 90% or greater certainty that human activities are causing climate change, the effects of this change are already being felt world-wide, and that limiting global warming to between 2°C and 4°C will slow the annual growth of global GDP by just 0.12% by 2030.

IHT notes that IPCC has issued a series of increasingly grim reports in the last two decades assessing scientific, technological and economic issues surrounding climate change. It is expected to issue another report in the next few months, before the United Nations Climate Change Conference in Indonesia on Dec. 3. Some 180 countries are scheduled to begin negotiations there on a successor to the Kyoto Protocol, which expires in 2012.

Oh, and I think I will pat myself on the back, just once. On January 10, 2007 I wrote about Global Warming concerns in Japan:

Al Gore's documentary about global warming will premiere on January 20 here in Japan, so I expect more debate about this topic during 2007. Also, in 2008, Japan will host the G8 meeting, and it has been decided that CO2 emissions will be discussed. My concern is that governments and the nuclear industry are using this debate to justify the construction of more and bigger nuclear reactors, certainly not a "sustainable" alternative.

Pandabonium said…
Interestingly, there is an impressive movement in American politics right now attempting to draft Al Gore into being a Presidential candidate. Since already won once, I guess that would be a "re-election" campaign.

Something needs to move this issue to the fore. So far, it seems corporations still steer the reaction to global warming in whatever direction they think will profit them, and politicians are all to often their willing servants.
8:17 pm, October 17, 2007

Anonymous said…
I wish they would change the name to "Nobel Peace Award".

A prize is something you win at the fair, or get in a box of breakfast cereal. It really is an award - given for achievement.

Martin J Frid said…
Hmmm, good point. They do use the verb "to award" the Nobel Prize but I agree that "Prize" is not quite Queen's English! We use the word "nobelpris" in Swedish so I suppose they just translated that.

Gore deserves it, and so does the IPCC that somehow gets forgotten in all the media bruhaha about this.
7:31 am, October 18, 2007