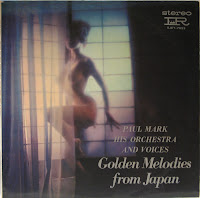 Ah, the pleasures of the Internet. On LP Cover Lover I found a mysterious LP cover that I really liked, by an artist I had never heard of. His name is Paul Mark, and it turns out he is a Japanese musician based in Hawaii, and the album is from the early 1960s. Then I had to do some serious searching to find a few soundtracks (nothing on YouTube!).

I was delighted by the mix of girlie vocals, cheesy electric organ, shamisen and percussion instruments that sound like the castanet. Here is one called East to West (mp3).

More on Exotica and Hawaiian (how's that for a politically incorrect name!) including a lovely song from the above album Golden Melodies from Japan (mp3).

Then, it seems Paul Mark and his orchestra went slightly mad and released an album called Twelve and a Half Geishas Must Be Right. 14 songs, and here is one of them - the famous hit song called Sukiyaki (mp3). 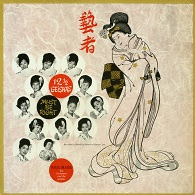 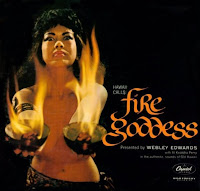 Fire Goddess - they just don't make covers like that anymore!

Too wonderful - Swedish actress Ann-Margret on the cover of two South Korean LPs... Most likely from the late 1960s. Collectors' items!
Music

Pandabonium said…
Great covers. In Hawaii, Martin Denny and Arthur Lyman (who started out in Denny's group) became very popular in the late 50's and early 60's with vibraphone and percussion groups plus jungle bird calls.

Lyman became famous for "Yellow Bird" and "Taboo". I had the privilege of playing in a big band featuring Arthur Lyman during a fund raising concert. In his later years, he was a sort of ambassador for Hawaii tourism, playing concerts in Chicago, New York, etc., which led to a renewed interest in his work and remastering of LPs onto CDs.